Well-known for his improvised embellishments and cadenzas in Classical period repertoire, Robert Levin has made recordings for DG Archiv, CRI, Decca, Deutsche Grammophon, Deutsche Harmonia Mundi, ECM, New York Philomusica, Nonesuch, Philips and Sony Classical. These include a Mozart concerto cycle for Decca; a Beethoven concerto cycle for DG Archiv (including the world premiere recording of Beethoven’s arrangement of the Fourth Concerto for piano and string quintet); and the complete Bach harpsichord concertos with Helmuth Rilling, as well as the six English Suites (on piano) and both books of the Well-Tempered Clavier (on five keyboard instruments) as part of Hänssler’s 172-CD Edition Bachakademie. The first recording in a Mozart piano sonata cycle has also been released by Deutsche Harmonia Mundi.

A passionate advocate of new music, Robert Levin has commissioned and premiered a large number of works.  He is a renowned chamber musician and a noted theorist and musicologist. His completions of Mozart fragments are published by Bärenreiter, Breitkopf & Härtel, Carus, Peters and Wiener Urtext Edition, and recorded and performed throughout the world. 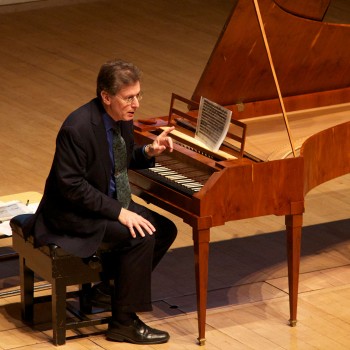