Mona Siddiqui joined the University of Edinburgh’s Divinity school in December 2011 as the first Muslim chair in Islamic and Interreligious Studies.  Prior to this she was Professor of Islamic Studies at Glasgow University  where she directed the Centre for the Study of Islam. Her research areas are primarily in the field of Islamic jurisprudence and Christian-Muslim relations. Amongst her publications are Christians, Muslims and Jesus (Yale University Press, 2013), The Good Muslim: Reflections on Classical Islamic Law and Theology (Cambridge University Press, 2012), The Routledge Reader in Christian-Muslim Relations, (Routledge 2012)  How to read the Qur’an (Granta 2007) as well as numerous articles and think pieces. Her book recounting her personal theological journey is currently in press with IB Tauris titled Between Faith and Freedom. Her current research is on the legal and theological limits of hospitality which will be published with Yale UP. She currently holds a visiting professorship at the universities of Utrecht and Tilburg and is an associate scholar at Georgetown University’s Berkley Centre for Religion, Peace and World Affairs. In March this year she will hold the Humanitas  professorship in womens rights  at Cambridge University.

In her public work she engages on issues of faith and ethics in society as a well known public intellectual nationally and internationally. Professor Siddiqui is a regular commentator in print and broadcasting media, a frequent contributor to Thought for the day for BBC Radio 4 and BBC Radio Scotland and chairs the BBC’s Religious Advisory Committee.  She is a fellow of the Royal Society of Edinburgh, Royal Society of Arts and an honorary fellow of the Royal Incorporation of Scottish Architects in recognition of her public work in the UK. In 2011 she was awarded an Order of the British Empire (OBE) for her contribution to interfaith services and in 2012 appeared on the BBC’s Desert Island Discs in recognition of her role in the academy and public life. She holds 3 honorary doctorates and will receive a DLitt from the University of Roehampton in June 2014. She currently serves as Assistant Principal for Religion and Society at Edinburgh University.   Between 2013-2014, she will serve as the Vice-Chair of the Global Agenda Council on Faith for the World Economic Forum and has been invited to speak at Davos. In 2016 she will deliver the Gifford lectures at the University of Aberdeen.

While in Cambridge Mona Siddiqu will give a series of three public lectures and participate in a concluding symposium. Please click here to see information about these events. 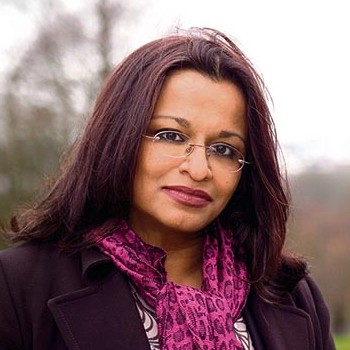