On borders and conversion: Representing, crossing and experiencing the frontier between Bologna and Modena in the early modern period

This project examines the uncertainties, contradictions, and complexities of defining a border by water between two distinct early modern polities - the Papal States and the Este State - and the discourses that accompanied this process. On the one hand, borders were and are territorial limits playing important roles in the constitution of nation-states. On the other, borders are places continuously subject to negotiation and interpretation, sites in constant flux. Often this results in an intense production of sometimes inter-dependent texts and images. The roles of these, in turn, is paradoxical: they help to constitute, maintain, police or contest the very idea of the border whilst, at the same time, pointing towards its essential fragility, its propensity to natural and social erosion.  And, in this process, they draw attention to their own inadequacy: the flux of a border cannot be fixed in any form of textual or visual representation.

Based on unpublished manuscript material - maps, official reports, drawing, and texts – the project demonstrates the potential of borders themselves to subvert official definitions of authority as well as geographical constraints, introducing concepts of mutability and conversion. Conversion is understood as an instrument of state power, as movement across bodies of water, and as symbol of the fraught character of representation itself.

She earned  her PhD in Art History from the University of East Anglia in the UK. Her principal research interests include the visual and material culture of early modern Italy, from architecture and painting to cartography and travel narratives with special interests in the circulation of artistic forms and ideas into and out of the Italian context. Her area of research also includes the relationship between aesthetics and material culture in their various meanings across a range of early modern media, with an emphasis on cartography and the problems of representation. Her doctoral thesis, “Between cartography and representation: borders and maps of early modern Bologna and Modena,” explores notions of borders, fluidity, representation and experience of space in relation to early modern cartography. She received her BA and MA degrees in Art History at the University of Rome ‘La Sapienza’ with a dissertation on rural architecture and its relation to the Mediterranean world exploring the consequences of contemporary mass tourism in a particular type of rural architecture in Southern Italy. Her research interests also focus on the study and analysis of the problems relating to the preservation and documentation of cultural heritage. 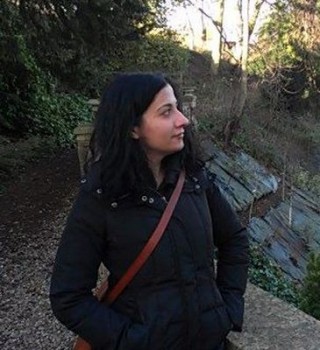