Borderland entanglements: A comparative approach to civil-military relations during the First Global Age

After the fall of the Berlin Wall the very concept of "territorial border" seemed to become obsolete. It was assumed that as the world became more open, accessible and cosmopolitan, the borders of the old nation-state would eventually fade away. The new era would lead to a "flat" world. Today we do know that our world is not heading towards "borderless" utopia. The rise of ethnic and religious strife, mass migration, and the economic crisis, among other transnational problems, may have eroded some of the old borders but have also encouraged the creation of new ones. The fact of living in a "flat world" has not prevented the building of new barriers and walls. The new boom in border studies during the last years reflects a shared interest in balancing the need for borders and the challenges of an increasingly globalized world.

Perhaps one of the most obvious outcomes of the increase of border tensions around the world is the re-militarization of borderlands. Border surveillance and security policies are intended to protect the territory from foreign threats, but the fact is that they also may have a great impact on homeland population. Militarization could be problematic or even contradictory to our global, democratic, liberal societies. The future consequences of this trend are unpredictable. However, from a historical point of view this is hardly a novelty. It could be said that militarization was one of the most prominent features of borderlands all along history. In the past, borderlands used to work more as bulwarks or buffer territories than ordinary administrative districts. In borderlands, civil and military affairs collided and entangled mutually and intensely. From this point of view a comparative study of borderlands during the First Global Age could provide us useful insights on our own globalization.

The purpose of my project is to study the legal, cultural, and political consequences of the militarization of borderlands in the Spanish Empire from a comparative and interdisciplinary perspective. This project aims to offer a new approach to the study of territorial sovereignty which takes into account the truly global nature of the Spanish empire, hence avoiding the trap of traditional narratives of nation-state building. My research raises new questions about the concepts of jurisdiction and sovereignty before the rise of modern nation-states.

Dr. Fernando Chavarría-Múgica is a historian of the Early Modern Spanish empire, currently affiliated to the Interdisciplinary Centre of Social Sciences at the University Nova of Lisbon, Portugal. Before arriving to CRASSH he has been CNRS/Marie Curie Intra-European Fellow at the EHESS in Paris, France, and Juan de la Cierva Researcher at the University of Alcalá, Spain. He was awarded his PhD in History and Civilization from the European University Institute, Florence, Italy. His current research interests are: borders and borderlands, civil-military relations, political culture, factionalism, and the History of Emotions. 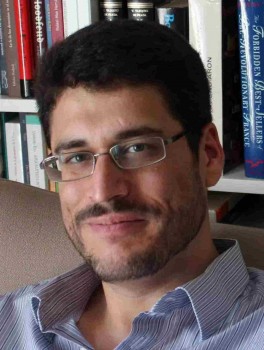