Framings and Foci in Epidemiological Obfuscation

This is an online event hosted via Zoom. Registration is required.

Despite afflicting mostly Africans and south-eastern Asians, primary liver cancer was far from neglected by biomedical research in the middle decades of the twentieth century. Pursuing liver cancer as a model of environmental and viral carcinogenesis, research teams flocked to African hospitals and villages to collect samples of altered livers, infected serum and contaminated foods. This intense research activity sought to identify isolatable, provable, and modifiable causes, helping to make hepatocellular carcinoma the first vaccine-preventable cancer. Alongside – as well as through – this aetiological knowledge, however, research actively and durably obscured African situations of carcinogenic exposure and of possible protection. In other words, this knowledge was unprotective not just because it failed to be 'applied' as hepatitis B vaccination and aflatoxin control, but also because of the epidemiological ignorance that arose from its aetiological obsessions. Focusing especially on liver cancer research conducted in Senegal, this paper examines how epidemiological (non)knowledge is refracted through postcolonial geographies of trade and biomedicine, as well as racialised valuations of life.

This paper draws on ongoing research in Senegal on urban food insecurity and the emergence of ‘new’ chronic diseases. Senegalese explanations for the origins of diabetes, heart disease and hypertension tend to focus on the ambiguous relationship of those diseases to long standing food challenges, including hunger and scarcity. The impact of hunger and the burden of chronic disease are often described as 'hidden', requiring representation and unveiling.

Running alongside these attempts to scope out and better understand the burden of chronic disease, I identify local public health practices working on chronicity and nutrition. This public health is attuned to patterns of access and entitlement and the social operation and circulation of shame. I challenge the idea that public health defines useful social scientific knowledge according to how well it can be operationalised, translated between domains of practice, or turned toward the solution of tractable social problems. Instead, I consider pragmatic and collaborative practices of discretion, even obfuscation, that can produce ideas and interventions that work in practice on multiple, complex and intersecting nutrition challenges. 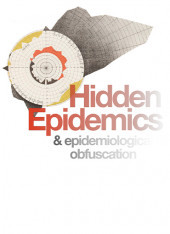 Framings and Foci in Epidemiological Obfuscation