This is an online event hosted via Zoom. Registration is required for this event.

Urban Affectivities: The Afterlives of Urban Conflict Between State and Sensoria in Amed and the West Bank

In this seminar, we explore how questions of memory, affect, and power become sites of contest in the aftermath of urban conflict. How do urban memories, affectivities, and vital politics come to inscribe how violence is measured and made sense of? How do questions of heritage and surveillance come to shape the pasts, presents, and imagined futures of urban spaces?

This talk explores urban political ecologies of belonging brought about by state-endorsed discourses and practices of emergency in Turkey’s largest predominantly Kurdish-inhabited city Amed (officially known as Diyarbakır), a city that has witnessed numerous episodes of emergency rule over the last few decades—most recently in 2015-16 when war flared up in the region. Emergency increasingly informs contemporary state techno-politics as a normalised condition to inhabit rather than simply as an abnormality to prevent. Critique tends to situate emergency as such within two political paradigms: neoliberalism and coloniality. Critics prioritising the neoliberal paradigm have problematised the financialisation of risk for speculative-developmentalist and rentierist purposes, while those focusing on coloniality have emphasised the uneven—that is, racialised—implications of the very modern inventions of risk, rent, and development at work here. Where critique has considered contrarian responses, it has tended to attribute these to the creativity with which laypeople navigate neoliberalism by exploiting its imperfections or to the indigenous knowledges through which local populations challenge statecraft’s colonialist claims to scientific universalism and developmentalist standardisation. This talk converses with these strands of critique in light of ethnographic fragments from a neighbourhood in Amed where emergency looms large today not only as the basis of a legal regime but also as the stuff of a disaster-proofing policy. Discussing responses to emergency as such that have insisted on holding statecraft answerable to its own claims rather than simply repudiating them, I explore what critical imaginaries and practices of belonging might be informed by this insistence.

Çaylı, Eray (2021) “Contemporary Art and the Geopolitics of Extractivism in Turkey’s Kurdistan,” Transactions of the Institute of British Geographers (Early View)

In May 2021, Palestinians in Lydda (Lod), an Israeli city near Tel Aviv, took part in protests against the forced removal of some Palestinian families in East Jerusalem. Similar protests took place across East Jerusalem, the West Bank, and different Palestinian localities within Israel. The protests, aptly named ‘the Unity Uprising,’ spilled over all sorts of legal, spatial, and symbolic borders imposed on Palestinian populations. In the process, they made visible a geography of colonial rule that often remains obfuscated by more mundane and legalistic practices of control from building licenses, to censuses and ID certification, to the distribution of restrictions on movements along legal and spatial lines. In my talk, I aim to excavate the longer-term practices of war and displacement that often remain hidden within everyday life in Lydda, which, as a city, is typically mis-understood through the tropes of ‘mixed city,’ ‘multicultural city’ or ‘multi-ethnic’ city. These practices of control, which reflect the city’s linkages with the Israeli state’s (denied) settler coloniality, have inhered into the built environment, effectively shaping everyday social relations and emotions within the city. The talk uses examples of how the urban order is enforced and experienced in Lydda to argue that understanding experiences of urban militarism today requires paying sustained attention to histories and structures of global coloniality across northern and southern urban formations.

A broader project on Palestinians across Lydda and the West Bank

Part of the introduction of my book forthcoming with Oxford University Press (tentative date December 2022). The book is now titled Citizens and Refugees: A Comparative Ethnography of Palestinian Marginalities.

Dr Eray Çaylı, PhD (University College London, 2015), teaches and researches the spatial and visual politics of violence. Eray is Leverhulme Early Career Fellow (2018-22) at London School of Economics and Political Science where he also teaches at postgraduate level. Eray is the author of Victims of Commemoration: The Architecture and Violence of Confronting the Past in Turkey (Syracuse University Press, 2021), co-editor of the anthology Architectures of Emergency in Turkey: Heritage, Displacement and Catastrophe (Bloomsbury/I.B.Tauris, 2021), and guest-editor of special issues for the International Journal of Islamic Architecture (themed “Field as Archive / Archive as Field”) and for the Journal of Visual Culture (themed “Testimony as Environment: Violence, Aesthetics, Agency”). His articles on memory activism have appeared in Environment and Planning D: Society and Space and International Journal of Urban and Regional Research, and those on the aesthetics-as-politics of extractivism have been published in Antipode and Transactions of the Institute of British Geographers, among others. In the city of Amed/Diyarbakır, he has collaborated with the local Chamber of Architects and with the independent artist-run space Loading to coordinate free-of-charge research workshops on urban political ecology.

Dr Silvia Pasquetti is a political sociologist and urban ethnographer working at the intersection of law and society scholarship, urban studies, and citizenship and refugee studies. Her work focuses on forced displacement in comparative and global perspective and in connection to histories and structures of coloniality, race, militarism, and urban marginality. She is currently a Lecturer in Sociology at Newcastle University. Previously she was a Research Associate in the Department of Sociology and a Stipendiary Junior Research Fellow (Clare Hall) at the University of Cambridge. She received her PhD in Sociology from the University of California at Berkeley. In 2018-2019 she was a member of the Institute for Advanced Study (School of Social Science) in Princeton, and she is a former Fulbright scholar. Silvia is the co-editor of the anthology " Displacement: Global Conversations on Refuge” (2020; Manchester UP). She also published extensively on issues of coloniality, displacement, urban militarism, law, emotions, and moral-political dispositions among Palestinians across the Green Line. This research has appeared in interdisciplinary and sociology journals, including Theory & Society, Ethnic & Racial Studies, Law & Society Review, International Journal of Urban and Regional Research, Annual Review of Law and Social Science, Political Power & Social Theory, International Sociology, and City. She has also published a piece titled 'Words Burn Lips" on the urban security state in Lydda for Contexts. Further, she has published public sociology essays on sociology and postcoloniality, global migration and refugees in the British Journal of Sociology and on refugees and overlapping marginalities in the Italian South for The Middle East Report (MERIP).

An event organised by In War's Wake: Mobility, Belonging, and Becoming in the Aftermath of Urban Conflict Research Network
Administrative assistance: networks@crassh.cam.ac.uk 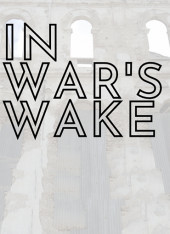 CANCELLED. Between Mourning and Re-Making: Scales of Urban Reconstruction After War