This event is free and open to all. Please note that the title and subject of the seminar have changed from the one originally advertised.

Please reserve your seat via Eventbrite.

A wine reception will be held in the atrium after the event.

On 16 November 2016, both Houses of Parliament completed their examination and review of the Investigatory Powers Bill and it will become law before the end of 2016. When it was first published in draft form a year ago, the then Home Secretary, Theresa May, promised that the Bill would establish a “world-leading oversight regime” with “powers fit for the digital age” that would be “clear and understandable”.

Nevertheless, the Bill has since been the subject of considerable controversy. Advocates, including, Professor Sir David Omand (a former Director of GCHQ ), stress that the importance of the new statute cannot be overestimated as it puts the secret surveillance activities of the State “under the rule of law” for the first time in 500 years and makes such powers “comprehensible to the citizen”.

Critics, however, argue that the new law provides the State with unprecedented powers that are “more suited to a dictatorship than a democracy” (Jim Killock, Executive Director, Open Rights Group). Civil society organisations have described the law as a “Snooper’s Charter”.

Of particular concern is the scope of powers provided under the law which will enable public authorities “to indiscriminately hack, intercept, record, and monitor the communications and internet use of the entire population” (Bella Sankey, Policy Director, Liberty).

In its final event of the Technology and Democracy Project’s 2016 seminar series, an interdisciplinary panel of speakers will address the political, historical, technological and human rights implications posed by this divisive new legislative framework.

Please join us for a discussion of what kind of precedent this significant new law represents for technology and democracy both within and beyond the UK. 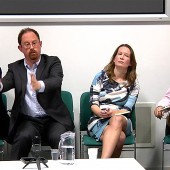