We’re also fans of not tracking changes on revisions. In fact, we’re pretty sure the track changes function, which brings a whiff of snooty scolding, bears the cloven stamp of Satan.

Doubtless collaboration has its costs, but we think this advice is mostly wrong. The division of labor in the academy has grown so complex and the world even more so that solitary thinkers are decreasingly competitive. More importantly, much of the best work, and the best moments working, come from coauthoring.

Having just finished a book that took five years to write, we have a fair sense of the ups and downs of working together. Perhaps some of our experiences may be of use to you. Here are a few things that worked for us—many of which worked for us after not doing them definitely didn’t work.

Ground Rules First. Like forming a band, coauthoring raises the odds of making excellent music, but it also raises the odds of punching each other in the mouth. To avoid maledictions, imprecations, and some sulking, set a tone of honesty, communication, and compromise from the start. This basically entails nailing down how the labor and credit will be split. There’s no right or wrong way to do this, only what works for you.

Things Fall Apart. Projects tend to get out of hand so plan accordingly. Originally, our book was supposed to be an article, but, as academics are wont to do, things got carried away and delayed. Inevitably, conditions change and it helps to be armed for the long term with clear expectations, a sense of humor, and an understanding that agreements have an implicit “unless otherwise agreed” clause.  Plus, that’s just the work part; the life part won’t stand still either. Against the demands of research, we had to balance a tenure denial, a divorce, medical problems, agonizing deaths, and many personal losses.

It’s Not About You. Relationships are intricate ecologies, and managing them is key to the success of your project. It was not long into our working relationship that we discovered that we’re both pains in the ass some of the time. This comes as no surprise to anybody who knows us, but then again we’re not strange in this regard—everybody’s snobby about something. Good scholarship isn’t about you or your egos, no matter how bloated or brittle. The research is greater than either of you, so behave. The world cares a lot more about DNA than whether Watson or Crick was lead author.

Trust Your Partner. People don’t pair up randomly. Warren Buffet and Charlie Munger are about equally brilliant; Google and Apple weren’t founded by lone geniuses; and Bill Gates once said the only thing he had done alone is take tests. Coauthors come together because they’re complements, and attempting to micromanage competencies is a waste of time and talent. By all means offer suggestions and push back from time to time, but respect areas of expertise. Where you clash on even footing, neutral arbiters can solve problems galore.

The Infinite Veto. We’re big believers in the infinite veto system, where authors can block any material they’re uncomfortable with. Obviously such a system can break down as numbers increase. But, in small settings they can cut down the self-indulgent fat to which academics are prone. If you miss something, put it back in or have a discussion about phrasing. Still disagreeing? Review the trust point above.

Don’t Track Changes. We’re also fans of not tracking changes on revisions. In fact, we’re pretty sure the track changes function, which brings a whiff of snooty scolding, bears the cloven stamp of Satan. All that matters is whether it reads clearly, convincingly, and logically—not who wrote it.  If you miss some verbiage, put it back in or have a discussion about phrasing. But if you don’t trust somebody’s judgment, coauthor with somebody else.

Ultimately the allure of coauthoring is better craftsmanship and more fun. With adaptive attitudes, individuals can create a beautiful whole without sacrificing individuality or coherence. Fights come and fights go, but work and friendships endure. With luck and good sense, coauthoring can lead to torrid trysts of creativity and lasting intellectual romances. Either way, the ending is happy. 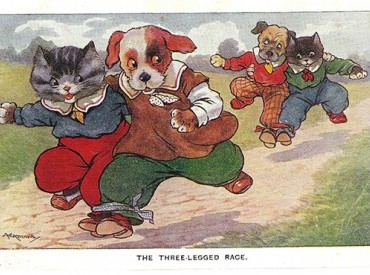