An introductory Q&A with the Hidden Epidemics and Epidemiological Obfuscation research network (2021 – 2022).

Q. How did Hidden Epidemics and Epidemiological Obfuscation come about?

Through our work as public health practitioners and researchers, we kept encountering situations where the systems ostensibly set up to make burdens of disease visible were actually acting to hide them. Sometimes it was overt, for example, in 2017 Dr Jephcott found herself working as a field epidemiologist in a cholera outbreak in Ethiopia with local epidemiologists who had been instructed by government officials not to acknowledge the presence of cholera within the country. More often though, the obfuscation we encountered was subtle and baked in the daily practices to the point that if you were not looking for it, it would have been easy to miss. For instance, the difficulty in obtaining data on COVID-19 recovery relative to the ease with which data on hospitalisations and deaths was collated probably led epidemiologists to model the trajectory of the epidemic according to the latter alone, erasing the burden of chronic manifestations now referred to as ‘long covid’ from much of the early discourse and public health decision making.

Epidemiological obfuscation is ones of those things that once you start to notice it suddenly it’s everywhere. In recent months, Twitter and the mainstream media have covered chronic fatigue patients’ fight with the British medical establishment to have their condition recognised, the large number of deaths due to TB in Canadian residential schools in the early 20th century that medical officers simply chose not to count, and the difficulties African epidemiologists have faced simply trying to publish the outbreaks they have investigated in medical journals to get them onto the official record and into the public domain.

Whilst the work of making diseases visible within public health is routinely discussed and interrogated, the work of rendering diseases invisible or illegitimate has received little attention, despite its obvious serious consequences for both health and social justice.

The Hidden Epidemics and Epidemiological Obfuscation research network, or ‘Hidden Epidemics’ for short, is our attempt to address this gap. By bringing together a diverse range of experts, we hope to collate case studies of epidemiological obfuscation and, hopefully, sort and characterise these processes. In doing this, we may also get to peak at the epidemiological landscapes that have gone unseen because of them.

Q. By definition, a CRASSH Research Network has an interdisciplinary question at its core. What is yours?

The inverse, the processes by which burdens of disease come to light, are the sum of a vast arrays of factors. These include, the distribution and incidence of disease, the current vanguard of technological and scientific innovation, the design of surveillance systems and research initiatives, the provision of healthcare services and concomitant patterns of treatment seeking, all of these factors are informed by larger shifting political, social, material and economic landscapes. This indicates that characterising the processes of obfuscation is going to require a cross-disciplinary approach.

At the very minimum, understanding epidemiological obfuscation will require the perspectives, insights, and analyses of historians, anthropologists, clinicians, epidemiologists, patient activists, biomedical researchers, political scientists, geographers, and philosophy of science scholars.  As our network progresses, we hope to integrate an even greater array of perspectives as we try to elucidate under what circumstances epidemiological obfuscation happens, what it looks like when it does, and what the underlying mechanisms are.

Q. Could you tell us a bit more about this year's convenors, speakers and attendees and the perspectives they bring to the discussion?

Hidden Epidemics is convened by Drs Freya Jephcott and Charlotte Hammer and PhD candidate Liza Hadley. We all do a combination of interdisciplinary research and applied epidemiology, though the exact forms of epidemiology we respectively study and practice differ in detail.

Freya is primarily a medical anthropologist interested in how public health disease surveillance and response systems handle uncertainty, however, in addition to her research, she also does intermittent applied work as a field epidemiologist and advising on policy.

Charlotte is an infectious diseases epidemiologist. Her research interest lies in understanding how novel diseases evolve from singular spillover events to large scale outbreaks. She is also interested in the drivers of outbreak risk in humanitarian emergencies. Charlotte works intermittently as a field epidemiologists for the World Health Organization and completed the European Field Epidemiology Training Program.

Liza is a mathematical modeller and epidemiologist. Her PhD spans the interface of infectious disease modelling and public health decision-making. She is interested in mapping the utility of and understanding current practices in mathematical modelling for outbreak response, with a view to advancing this emerging field. Liza is also separately interested in outbreak response and its obfuscation more broadly.

The network’s speakers will include an array of public health practitioners, patient activists, and science and social science researchers. Essentially, anyone who has an interesting example of epidemiological obfuscation or some light to shed on the processes underlying them will be invited to participate.

As the network is in its infancy, we can’t really say what the size or make up of the audience or will be, but we imagine it will look quite similar to the makeup of the speakers; that is a group of people interested in discussing epidemiological obfuscation and how epidemics come to be hidden.

Q. What can we expect from Hidden Epidemics and Epidemiological Obfuscation in 2021/22?

From our talk series, you can expect fascinating case studies of epidemiological obfuscation followed by engaging discussions. In conjunction with the talks, we have some other events and products in the works for later in the year, so be sure to follow us on Twitter (@HiddenEpidemics) or email Liza Hadley so you can be added to our mailing list.

Q. How can people learn more about your Network?

Please visit the research network’s web page on the CRASSH website and do join us for our network events!

If you have a topic or case study you would like to see discussed, please contact Freya Jephcott 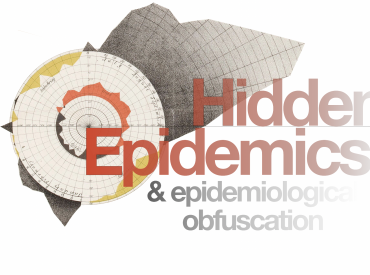