Housing or Poverty Trap for Women? A Case of Slum Rehabilitation Housing in Mumbai

We argue that minimum housing standards and energy policy can causally influence gender equality in an indirect manner.


Mumbai, the largest urban agglomeration and the financial capital of India, attracts large migration of labor force, where these slums offer the most affordable housing option. Presently slums form a significant part of Mumbai’s urbanscape with more than 50% of the city’s population residing in them. The purpetuality of slums in Mumbai is an 'unsettling reality at odds' with the growing economy of the city. As a solution to the 'theoretical ambiguity and anxiety' of accommodating the advances of information economy while tackling the proliferation of slums, the Government of Maharashtra has adopted the policy of the Slum Rehabilitation process. Although the slum rehabilitation policy seems economically promising, the benefits are myopic. The units are restricted to an area of approximately 24m² with no basic guidelines for design, energy efficiency or gender considerations.

The British Academy Knowledge Frontier Grant enabled us to conduct an in depth study in the slum rehabilitation colonies in Mumbai. We have conducted interviews with female occupants in four such Slum Rehabilitation colonies. The interview narratives in the case studies show that women’s household practices have radically changed after rehabilitation. Cooking and cleaning practices have changed due to LPG and water access inside the tenements. Due to poor design, comfort practices have become reliant on electric appliances such as fans and AC units. Cleaning, entertainment and childrearing practices have moved from outdoors to indoors due to lack of accessible outdoor spaces. This means higher energy intensity and also reduced social interaction and loss of women’s social capital. The study reveals very high maintenance and energy costs in slum rehabilitation housings that leave the households to struggle with basic needs. This creates a situation where women try to absorb high living costs by compromising comfort standards and looking for employment, often in informal economy, on the top of their caring responsibilities. Women’s time poverty does not allow them to explore their full potential and expand their capabilities by getting trained or educated, while the pressing need for income pushes them to informal labour and less skilled jobs. This situation is creating a poverty trap for women. The vicious circle of time and economic poverty restrains women from entering the formal labour market, and poor building design influences this either directly (e.g. increased need for electronic appliances, lack of communal spaces) or indirectly (e.g. reduced social interaction, lack of information about income opportunities).

Figure [L-R]: Lalubhai Compound, a Slum Rehabilitation Colony in Mumbai; Unhealthy environment by accumulation of solid waste in between the buildings; Use of air conditions in rehabilitated building; Women working in informal economy.

While it is hard to influence the socio-cultural context that shapes gender norms, we argue that minimum housing standards and energy policy can causally influence gender equality in an indirect manner. We are now exploring the potential of participatory design of such housing predominantly involving the female occupants to develop a gender inclusive housing prototype.

This project is a part of Global Energy Nexus in Urban Settlements (GENUS), an interdisciplinary research group in Cambridge which is supported by CRASSH. 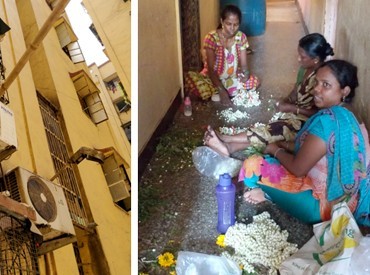