Over the course of two virtual afternoons, 'Dressing a Picture: Reimagining the Court Portrait' explored the myriad of meanings and values expressed within portraiture from a range of disciplinary lenses.

Authors and Convenors Ana Howie and Alessandro Nicola Malusà reflect on their conference Dressing a Picture: Reimaging the Court Portrait, 1500-1800 which took place online in May 2021.

The genesis of the Dressing a Picture conference dates back to November 2019 when we discovered the various points of convergence between our respective doctoral projects on early seventeenth-century portraiture. In discussing these points, we came across the lacunae in scholarly literature, and decided to launch a programme designed to generate fresh discourse.

Portraiture represents a fundamental tool with which to explore the experiences, aspirations, and motivations of early modern societies. Europe’s grandest portraits from the early modern period have been scrutinised by art critics and lovers from their first unveilings. This leaves us with over 500 years’ worth of scholarship, which has informed how these images are seen today. However, the interdisciplinary turn in the humanities has drastically transformed our approaches to these rich images, and our understanding of the cultures, societies, and environments that shaped them. It was therefore our goal to bring court portraiture into dialogue with the multiplicity of frameworks that inform interdisciplinary study.

Of particular interest to the investigations of our speakers was a focus on dress, adornment, and material culture. Early modern society was extremely dress literate; this phenomenon was pronounced at court, where everyone vigorously partook in the consumption of fashion and material goods. Within these sartorially minded communities, one was constantly on display. Portraiture was a unique vehicle for expressions of the intertwining of perceptions and presentations of subjects and beholders. Clothing and bodily ornamentation played a crucial role in this relationship, bringing liveliness, symbolic meaning, and socio-cultural values to the painted canvas.

Our conference brought together the many strands of meaning materialised in portraiture and demonstrated its centrality to the fashioning of early modern courtly identities. Importantly, the identities explored in portraiture did not only concern the elite but all levels of society, from tailors, jewellers, and furriers, to artists and their apprentices, court jesters, buffoons, and attendants. Questions of the body also took centre stage. The fleshy human body, be it male or female, old, young, pregnant, or othered was also subject to pictorial scrutiny, and speakers explored the ways in which bodies were susceptible to sartorial interventions in representation.

The early modern period witnessed a burst in global encounters, where images and objects played key roles. As our conference demonstrated, court portraits and luxury goods were not solely the prerogative of European courts and Western subjects.  These items of material culture had vast and varied ramifications across many global courtly settings. Importantly, these settings are fundamental to our comprehension of the function of court portraiture. Our speakers conceived of these spaces as pre-set stages for human action, and specifically the performance of a multiplicity of royal identities, emphasising that within these spatial frameworks, social relations between artist, sitter, and viewer could be activated and expressed.

The conference was closed by an insightful and thought-provoking keynote lecture by Professor Erin Griffey from the University of Auckland, who explored the role of cosmetics in early modern bodily adornment and image making. This was a fitting ending to an event that had brought together scholars at all stages of their careers, and from around the world.

Over the course of two virtual afternoons, Dressing a Picture: Reimagining the Court Portrait explored the myriad of meanings and values expressed within portraiture from a range of disciplinary lenses. Through the rich discourse generated by our speakers, moderators, and participants, the conference succeeded in advancing the discourse surrounding visual and material culture in early modern global societies. 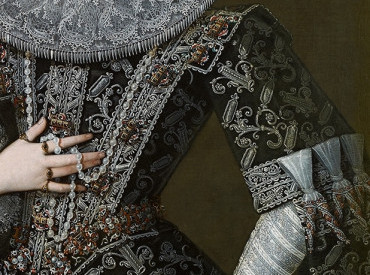