Buddhism and Science: Somatizing the Mind, Contemplating the Body

My research focuses on the myriad valences of meditation in modernity. My dissertation research focused on the political valence of a Tibetan Buddhist meditational ritual. My next research project will focus on the neuroscientific and psychotherapeutic valences that meditation acquires in the context of modern psychopharmacological societies.

As a visiting fellow at CRASSH I shall pursue two threads of research.

One, I shall continue my re-working of the dissertation thesis into a monograph. The monograph is titled When the Sun’s Rays are as Shadows – the Politics of Secrecy in an Exilic Tibetan Ritual. It analyzes how an esoteric meditational ritual performance may be conceived, by its monk performers and exile Tibetans more broadly, as a political act, of the same kind as public political demonstrations for instance. The monograph begins with a study of the Nechung kang-so (bskang-gso) ritual and its “secret” (gsang ba) nature, as this emerged and shifted over the years of my fieldwork at Nechung monastery in the exile Tibetan settlement at Dharamsala, India. It offers a critique of the dichotomy of surface and depth, a dichotomy that usually characterizes anthropological studies of secrecy. It argues that conceptualizing the secrecy of the Nechung kang-so in terms of the dichotomy of surface and depth merely mystifies and offers instead a conception of secrecy in terms of the notion of global flows. It is in such global flows that esoteric ritual acts, and discourses on them, come to be enfolded within more public, exoteric forms of political discourse. Secrecy is thereby involved in affective appeals to global publics via a poetics that is discernible across different, resonant strands of exile Tibetan political discourse.

Two, I shall use a part of my time as a CRASSH fellow to hone my next research project. This next project is on the uncanny valences that Tibetan Buddhist meditation comes to acquire in the context of the so-called “Buddhism and Science” discourse. This is a discourse that, in recent decades, has emerged from dialogues between the Dalai Lama and Tibetan Buddhist practitioners on the one hand, and a network of neuroscientists, psychologists and others at U.S. and European universities on the other. The latter seek to study meditation in laboratories with a view to understanding its influence on the modern biochemical subject, a subject understood in terms of neurochemical balances and imbalances, a subject who is thus quite alien to traditional Tibetan Buddhist meditational discourse and practice. I shall be engaged in reading research and putting together a project proposal towards grant applications and research permissions.

Urmila Nair is a Visiting Fellow at CRASSH, Easter 2013 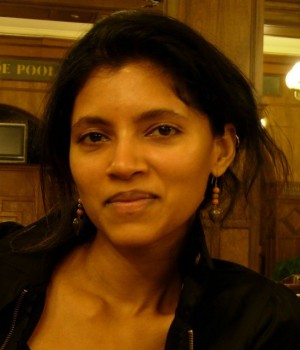