The work I am going to undertake while at CRASSH will provide the foundation for my next major research project, provisionally entitled ‘Perfume and Paradox: The Rhetoric of Scent, 1550-1750’. This book will explore the place of the sense of smell in general, and of perfumes more particularly, in the literature of that period, drawing on an emerging field of interdisciplinary research into the ‘lower’ literary senses of smell, taste and touch. The first stage of the research is to trace the early modern literary life of a single outlandish substance: ambergris.

Ambergris, we now believe, is a pathological growth from the stomach of a sperm whale, possibly caused by illness or irritation; when expelled from the whale and exposed over the course of years to the action of sea and sun, it develops a distinctive odour, like the transfigured ghost of musk, which has led to it being much prized in the arts of medicine, cookery and perfumery.

This account of its origin, even now not secure, is relatively recent; when routes of trade and travel were opened up in the early modern period, this valuable but uncategorizable substance was the subject of fascinated speculation, and poets of the time (Herbert, Herrick, Milton) used it as a figure of the mysterious and the exotic. My time at CRASSH will be spent exploring ambergris in the early modern world: the history of its importation, the myths and speculations that surrounded its origin, the beliefs about its medical and aphrodisiac powers, its uses and status, what it smelt like, and, above all, what it signified to the contemporary literary imagination.

Sophie Read is an Early Career Fellow at CRASSH, Michaelmas 2012.

She is a faculty lecturer in English and has been a fellow of Christ’s College, Cambridge, since 2006. Her first monograph, Eucharist and the Poetic Imagination in Early Modern England (which includes chapters on Southwell, Donne, Herbert, Vaughan, Crashaw and Milton) is forthcoming from Cambridge University Press later this year; she has also published on Shakespeare, Andrewes and Swift, as well as contemporary poetics. Her new research project builds on a long-term interest, both practical and theoretical, in perfume and writing about scent. 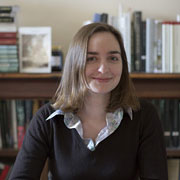