Dr Philip Knox is a Cambridge  Early Career Fellow and will be at CRASSH in Michaelmas Term 2019.

During my term as an early career fellow at CRASSH, I’ll be working on a book-length project that aims to rewrite fourteenth-century English literary history from the perspective a single text: the Romance of the Rose, a hugely complex and wildly popular French poem, written in two phases over the thirteenth century by Guillaume de Lorris and Jean de Meun. My argument is that in all the realms of thought most central to poetic activity in fourteenth-century England, the Rose was at once foundational and destabilising — paradoxically both a point of origin and an endlessly renewed force of transformation. Examining the Rose as a subject of debates and scandals in and around poetic communities in England, I investigate what it was that made that text so powerfully generative, before turning to an exploration of those realms of English poetic ambition that the Rose both made available and repeatedly transformed: the use of poetry as a vehicle for knowledge; the examination of art’s relationship to the world of nature, and the questions of order and (sexual) deviance that this relationship inevitably raises; the question of what it means to be a poet, to exist within a tradition and to present oneself in relation to that tradition. Positioning English responses to the text in relation to each other, and also in relation to parallel and interconnected developments across the Channel, I range over writers working in English and in French, from Geoffrey Chaucer to Oton de Granson, Thomas Hoccleve to Christine de Pizan, as well as John Gower, the Gawain-poet, William Langland, Thomas Usk, John Lydgate, and a host of anonymous responses and encounters that can be reconstructed from the archival record. Informed throughout by a critical engagement with theories of literary reception and aesthetic disruption, particular some of Walter Benjamin’s brief but intriguing reflections on the work of the literary historian, I aim to think again about the processes by which texts are absorbed and reconfigured by cultures, without losing sight of the irreducible particularity of the Rose, and its unique power to act upon and transform the cultures that encountered it.

I am a University Lecturer in Medieval English Literature in the Faculty of English. My doctoral training was at the University of Oxford, where I was also a Junior Research Fellow at New College, Oxford. I am one of the editors of the journal New Medieval Literatures. 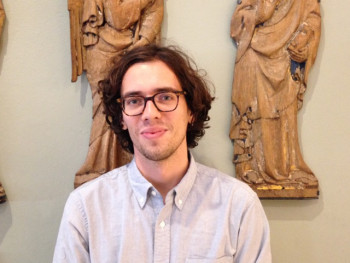