Postcolonial Cultures and the Cold War

Postcolonial studies and Cold War scholarship are preoccupied with cultural phenomena that could be loosely seen as contemporaneous; however, they have seldom crossed paths. For instance, scholarship on Kwame Nkrumah’s theory of neocolonialism takes no notice of the Ghanaian leader’s decision to seek cancer treatment in the Eastern Bloc, in Romania, where he spent the last months of his life. In other words, the emphasis falls either on resistance to continued forms of Western domination or on intellectuals’ ideological sympathies, whether communist, capitalist, or Non-Aligned. Postcolonial Cultures and the Cold War—a project that I will develop in part during the fellowship term—addresses this blind spot of contemporary scholarship. It will be the first book-length study of postcolonial writing (fiction, autobiography, essays, and theoretical works) in relation to the Cold War. The innovative aspects of this project are two-fold. It posits the importance of postcolonial polities and their cultural output for an understanding of the Cold War, thereby expanding a field of research routinely understood as a conflict between superpowers (the USA and the USSR). Also, it fosters a more accurate representation of the genealogy of postcolonial studies. Thus it crosses disciplinary borders, bringing together topics and methodologies previously seen as the separate purview of either postcolonial studies or Cold War scholarship.

The overarching model of analysis in postcolonial studies has been based on the one-dimensional exchange or contestation of values between subjugated nations and imperial centers in the West. Yet much creative and scholarly postcolonial writing developed concomitantly with the Cold War, when aspiring or newly independent nations were forging alliances with one or the other of the two superpowers. Instead of a narrow relationship between former colonies and Western metropolitan centers, I propose a triangle of interactions that includes Western powers, the Eastern Bloc, and Third World countries. My book will focus on essays and autobiographical writing by the leading intellectuals of the anticolonial struggle (Aimé Césaire, George Padmore, Frantz Fanon, Kwame Nkrumah), postcolonial scholarship (Edward Said, Gayatri Spivak, Aijaz Ahmad, Homi Bhabha), as well as fiction by celebrated postcolonial novelists (Ngugi wa Thiong’o, Ousmane Sembène, Lewis Nkosi, Mongane Wally Serote, etc), attending to the transregional flow of ideas and ideologies between East, South, and West. I plan to develop two chapters during the fellowship term. A first chapter will explore essays by anticolonial intellectuals, focusing both on explicit political affiliation and on moments of rupture with the reigning communist and capitalist ideologies. The second will discuss the apparently uncommitted stance of postcolonial theorists as a symptom of the Cold War and as a form of escaping the dichotomies produced by this global conflict. The works discussed in this part of the book challenge the traditional image of the Cold War as a bipolar conflict that generated unsophisticated ideological affiliations.

My project grows from questions I have posed in earlier publications on South African literature and postcommunist cultures, especially South African Literature Beyond the Cold War, as well as from exchanges with scholars from various disciplines who aim to develop a new conception of the Cold War.

Monica Popescu is a Visiting Fellow at CRASSH, Easter 2012.

Dr Monica Popescu has been Assistant Professor of English at McGill University since 2005 when she was awarded her PhD in Comparative Literature and Literary Theory. Her teaching and research areas include postcolonial literature and theory (especially contemporary South African literature), Eastern Europe and postcommunism, Gender studies, nationalism, and globalization.

Publications include South African Literature Beyond the Cold War. New York: Palgrave, 2010 and The Politics of Violence in Post-communist Films. Brasov, Romania: Concordia, 1999. 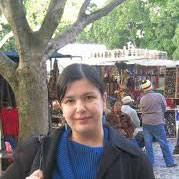