Mark Mazower is Ira B. Wallach professor of history at Columbia University. Trained in classics, philosophy and history at Oxford, and in international affairs at Johns Hopkins University, he is the author of several books on the history of Greece, modern Europe and international affairs. These include: Inside Hitler's Greece: the Experience of Occupation, 1941-44 (Yale, 1993), Dark Continent: Europe's Twentieth Century (Penguin, 1998), Salonica: City of Ghosts: Christians, Muslims and Jews, 1430-1950 (HarperCollins, 2004), Hitler's Empire: How the Nazis Ruled Europe (Penguin, 2008) and most recently Governing the World: the History of an Idea (Penguin, 2012). He comments regularly on international affairs for the Financial Times and the Guardian, and reviews for the TLS, the New York Times, the LRB and other journals.

During his stay at CRASSH in Lent Term 2014 Mark Mazower will give a public lecture, Facism and Democracy Today: What Use is the Study of History in the Current Crisis?, and hold a series of closed workshops. 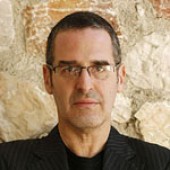