Aesthetic cognition is important for intersubjective attunement in human development, and attends to cultural emergence and transmission of ideas, practices and norms. Although the notion of aesthetics underpins several anthropological approaches to culture, scholars have rarely focused on the dynamics whereby aesthetic behaviours shape the symbolic processes of constitution and re-enactment of cultural heritage. A wide range of interdisciplinary investigations have been aimed at reconstructing the role of the body, gestures, mimetic behaviours, and ritualized actions in forming and developing cultural identity. Others studies have concentrated on the performative and non-verbal dimension of cultural transmission achieved through a relationship between the bodily affective interface and several culturally instantiated mediators. However, these studies take no notice of the cognitive operation of aesthetic behaviours and their role in the development of human cultural propensities.

This project will amend this state of the art through an interdisciplinary dialogue between this research and the evolutionary and cognitive approaches to aesthetics and cultural transmission processes. In contrast to what statistical and inferentialist models assert, cultural transmission is not just a spreading or copying of “bits of culture” (ideas, memes, concepts or propositional structures), but it reaches down into the sensorimotor schemas, feelings, and emotions. Therefore, to concentrate on the aesthetic is to emphasize the creative and expressive pragmatic conditions of non-verbal transmission, focusing on the psychic, sensorimotor and emotional dynamics as primary symbolic processes of emergence, acquisition, transformation and communication of cultural heritage. In doing so, this project adopts a perspective that emphasizes the multimodal and enactive nature of the aesthetic mind, while stressing the grounding of meaning in the expressive dimension of human experience. Attuned to the felt qualities of situations, in alternative to inferential and declarative knowledge, aesthetic behaviours are a primary, and socially meaningful, articulation of the sensory complexity of concrete and culturally-instantiated human existence.

Lorenzo Bartalesi is a Visiting Fellow at CRASSH in Easter Term 2017.

Lorenzo Bartalesi is Marie Skłodowska-Curie Fellow at École des Hautes Études en Sciences Sociales in Paris. In 2015-2016 he has been Junior Fellow at Institute for Advanced Study of Aix-Marseille University and from 2012 to 2015 postdoctoral researcher at Università di Firenze. He is Managing Editor of the journal Aisthesis. 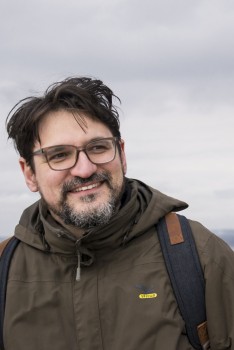