Dr Julie Barrau is an Early Career Fellow and is at CRASSH in Easter Term 2018.

A paradoxical creativity: circulation of knowledge and manuscript culture  in the Twelfth Century Renaissance

My project is deeply rooted in the study of Latin manuscripts, which I want to use to write a social history of the circulation of knowledge in England and Northern France in the long twelfth century. Its purpose is to shed a fresh light on the remarkable effects of the materiality and constraints of the manuscript production of texts: because each text and each assemblage of texts was a one-off effort, each was, in effect, unique. What I am doing, and which will constitute the subject matter of my second monograph, has never been attempted, mostly because the sources allowing such an enquiry have not been identified before.

The circulation of Latin texts is a crucial dimension of the intellectual developments of the twelfth century; it is particularly important to understand what was actually read, thought about, and used. Much work has been done by editors of specific texts, in their study of the manuscript tradition of their objects; marginalia, the notes left by readers in the margins, have also attracted serious attention. However, I believe that much can still be done.

Many medievalists share the assumption, often unconsciously, that educated people in the Middle Ages had such well-trained memories that they could store in their heads entire books. There certainly was a great interest in mnemonics in the period, as Mary Carruthers has masterfully shown. But there is also a great deal of evidence that medieval clerics relied on the written word to jog their memories, or to help them memorize.

Dr Julie Barrau read history at the École Normale Supérieure and at Paris-Sorbonne University. She started to work on 12th-century England for her MA dissertation and continued in this area for her PhD. After a year spent at Trinity College on a Knox scholarship, she was a Junior Research Fellow at Emmanuel College between 2006 and 2009. In 2009 she became Lecturer in medieval history at the University of East Anglia. She  came back to Cambridge in 2013 to take up a University Lectureship in Medieval British History. Publications include Bible, lettres et politique. L’Écriture au service des hommes à l’époque de Thomas Becket (Paris, November 2013), 'Gilbert Foliot et l’Écriture, un exégète en politique', Anglo-Norman studies, 27 (2005), pp. 16-31, and  'Jean de Salisbury, intermédiaire entre Thomas Becket et la cour capétienne ?', in Plantagenêts et Capétiens: confrontations et héritages, ed. M. Aurell and N.-Y. Tonnerre (Turnhout, 2006), pp. 505-516. 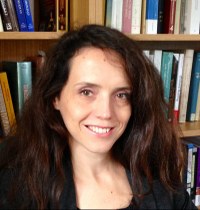