Dr Hazem Kandil is a CRASSH/SCAS/ProFutura Fellow in 2017-20. He will be at CRASSH from 2017-18 and will be at the Swedish Collegium in Uppsala during 2018-19, before returning to CRASSH in the final year.

The Military Origins of Freedom and Oppression

Studying revolution and war has been my prime occupation. It is these extraordinary moments that lay bare society’s underlying power structure and offer opportunities for change. My work was mostly focused on power relations within the ruling bloc. In Soldiers, Spies, and Statesmen (Verso, 2012) and Power Triangle (OUP, 2016), I examined how the Egyptian, Iranian, and Turkish regimes were shaped by the collaboration and collision of their military, security, and political institutions. And in America vs. Clausewitz (my current book project), I analyzed how tensions between the White House, Pentagon, and the CIA influenced the evolution of the American War doctrine. But I also studied opposition movements. Inside the Brotherhood (Polity, 2014) provided the first account of the power dynamics within the Egyptian Muslim Brotherhood with an eye towards explaining the movement’s spectacular failure during the recent revolt. The  CRASSH ProFutura Scientia Fellowship will allow me for the first time to broaden my analytical range from institutional power relations to those governing social development at large

Hazem Kandil is the Cambridge University Reader in Political Sociology and Fellow of St Catharine’s College. He studies power relations in revolution and war, focusing on the Middle East, Western Europe, and North America.

Following an MA (2004) in International Relations from the American University in Cairo, and an MA (2005) in Political Theory from New York University, he received his PhD (2012) in Political Sociology from the University of California, Los Angeles. He is the author of Soldiers, Spies, and Statesmen: Egypt’s Road to Revolt (Verso 2012), Inside the Brotherhood (Polity 2014), and The Power Triangle: Military, Security, and Politics in Regime Change (Oxford University Press 2016). He has published articles on revolution, warfare, and ideology in various academic journals and periodicals.

Kandil received the Philip Leverhulme Prize (2014), and a CRASSH ProFutura Scientia Fellowship (2016), which fund his current projects on the development of the US war doctrine, and the relationship between conscription and democracy in France and Egypt. 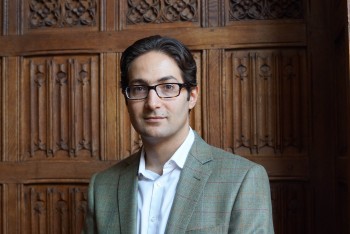