Local Priests on the Edge of Empire: The Rural Church and Parish Formation in the Eastern and Northern Marches of Germany, c. 1000-1200

It is a commonplace in contemporary accounts of the central middle ages (here taken to mean c. 1000–1300) to posit a Europe divided into a ‘centre’ and a ‘periphery’ – the former consisting of the old-Christian, post-Roman lands: the successor states of Carolingian Francia, Italy, and England; the latter of newcomers to Christianity and Latin literacy (Hungary, Poland, the Scandinavian kingdoms), or regions such as Ireland and Wales. Such a division is by no means unproblematic or innocent – indeed, one could replace the terms ‘central’ and ‘peripheral’ with ‘cultured’ and ‘barbaric’, or even ‘civilised’ and ‘backward’ and the meaning would in many ways remain unchanged. The assumption is that the peripheral was in the process of becoming more like the centre: cultural goods flowed toward the European edges; customs and habits dispersed. This process is commonly called ‘Europeanisation’: the making of Europe as a cultural entity. It is something of a paradox: at the same time, nations were becoming increasingly important – Europe also grew into a gathering of peoples, taken by at least part of their respective populations to be essentially different from one another.

My research project investigates an important part of the process of Europeanisation – the diffusion of a new mode of religious organisation, the parish. The parish priest in his parish church, with its baptismal font, its bell-tower, and its churchyard, is a familiar figure across central and western Europe; and in pre-industrial Europe, one of particular importance. From the central middle ages onward, the parish was the principal locus of interaction between the clergy and the vast majority of the laity. It was a centre of communication; a place where the locality encountered the universal hierarchy of the church. Its origins are unclear: the connection between the parochia of Carolingian Francia and the later-medieval parish is disputed. Scholars tend to agree that most of the Latin West was divided into parishes over the course of the eleventh and twelfth centuries, but ‘parish formation’ as a broader process nonetheless remains something of a mystery, and the older literature on the subject is sometimes riddled with teleologies and anachronistic assumptions. Most previous studies have been local in focus, selective in detail, and, by necessity, have lacked a wider conceptual framework. At CRASSH, I will investigate the interplay between this development and the cultural dynamics at the outskirts of the European centre, and at least begin a more broadly comparative, transregional study of the topic.

The geographical concentration will be on a large and diverse borderland area: the ‘frontier’ of the European centre to the east and north of the Kingdom of the Germans, the marches which marked the borders with Hungary, Poland, Bohemia, Denmark, and the Slavic-speaking peoples to the south of the Baltic. These are areas with a complicated past, where ethnic and national divisions have been sharp and painful, and the wounds of history sometimes smart to this day. Some of the questions that need to be asked are the following: did the process of parish formation noticeably differ in European ‘centre’ and ‘peripheries’? To what extent was the process conditioned by local conditions? Were the functions and organisation of the earliest local churches principally a result of cultural transfer from the centre to the east and north? What role did the papacy and religious reform movements play in the process? How important was migration in creating a local priesthood in the marches? Was the rural parish an initiative of those it primarily benefitted (in terms of pastoral care), that is the local laity? Or was it a phenomenon imposed from on high, whether by bishops or secular lords, local or foreign – perhaps even an instrument of control? A wide variety of sources will be consulted: material (church buildings), documentary, narrative, and liturgical. The service books of the local church will be of particular interest, as evidence of the day-to-day activities of the local priest. My aim is to write medieval history with clear relevance also to the present; to investigate the coming-into-being of social structures which are still significant; and to explore how the construct of an east-western division in European culture and politics arose and based itself on a half-mythical, half-remembered medieval past.

He works primarily on the cultural and ecclesiastical history of Scandinavia and German-speaking Europe in the middle ages. He was born and grew up in Stockholm, Sweden, but studied in Cambridge as an undergraduate, at the department of Anglo-Saxon, Norse and Celtic.  He wrote his doctorate at King’s College London, on the subject of ‘German Influence on Religious Practice in Scandinavia, 1050–1150’. Following that, he spent almost two years in Germany as a post-doctoral research assistant (wissenschaftliche Mitarbeiter) at the University of Erlangen-Nuremberg, as part of a project investigating notions of the future, prophecy, and prognostication in pre-modern Europe and East Asia, before joining CRASSH. His research interests include Christianisation and church reform, medieval imperialism, secular clergy and lay religiosity, parish formation, and religious ritual and liturgical manuscripts. He has also recently taken an interest in modern views of the medieval past, in particular in the context of German nineteenth-century nationalism, whose shadow is omnipresent in one way or another in the project he is currently pursuing at CRASSH. He is currently in the final stages of preparing his doctoral thesis for publication, and teaches in the Faculty of History and the Department of Anglo-Saxon, Norse and Celtic. 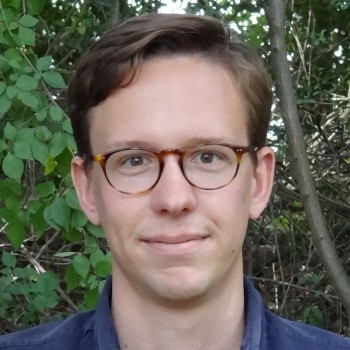