Dr Chana Morgenstern is a Cambridge Early Career Fellow and will be at CRASSH in Michaelmas Term 2018.

A Literature for All Its Citizens: Aesthetics of Coexistence in Israel/Palestine

My current research project and manuscript in progress, A Literature for All Its Citizens: Aesthetics of Co-Existence in Israel/Palestine, is the first chronicle of the shared history of anti-colonial resistance literatures and radical aesthetic practices initiated by Palestinians and Jews in Israel/Palestine. Due to the paradigm of national separation that over-determines scholarship of the region, these shared endeavours have been erased, as the writers involved in them are written into separate national and linguistic canons. A Literature for All Its Citizensfills this gap in the field by unearthing the connections between Palestinian and Jewish Israeli writers and literary circles in their joint engagement with political resistance, anti-racism, anti-colonialism and anti-separatist thought in a global context, thus challenging the disconnect of regional communities and cultures.

The study spans a half century, beginning in 1949 and ending at the turn of the 21stcentury.

The book begins by locating the foundation of anti-separatist literature in the literary movement founded by Arab Jews (Mizrahim) and Palestinians, who drew on their common experience as Communist writers of the Arab world to collaborate under the auspices of the Israeli Communist Party (MAKI). The movement and its cultural journal, al-Jadid [The New], formed the earliest Palestinian-Jewish alternative to national-separatist culture after the establishment of the state. Despite their near total isolation from the Israeli mainstream,this group developed asocialist, democratic aesthetics grounded in multiple intellectual and political nodes. This was facilitated by the circulation of the journal and its participation in many of the debates of anti-colonial movements in the Arab and Third Worlds during the era of internationalism and decolonization.

Al-Jadid ’s project of narrating the lives of marginal communities in the early years of the state formed a collective narrative that refuted the premises of ethnocentric Zionism and Arab-Jewish separation. As such, this corpus can be seen as the first post-48 attempt to establish what Gil Hochberg terms an “anti-separatist imaginary,” found in literary works that seek to provide alternatives to partition, apartheid and national segregation.

The second half of the monograph goes on to examine the impact of this literary scene on the anti-separatist and democratizing literary activities of four generations of writers and cultural scenes (1965-2000). Having identified al-Jadid’s key aesthetic practices and debates on popular socialist literature, documentary and history, translation, bilingualism and border-writing, I trace their evolution through an alternative genealogy of writers, scenes and literary organizations.

Dr Hana Morgenstern is a scholar, writer and translator. She is University Lecturer in Postcolonial and Middle East Literature at Cambridge University and a Senior Fellow at Newnham College. Dr Morgenstern is co-director of the Documents of the Arab Left Project. She is currently at work on a book manuscript titled, A Literature for All Its Citizens: Aesthetics of Coexistence in Israel/Palestine. 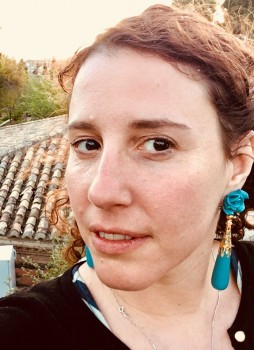