Professor Catherine Pickstock is a Mellon Teaching Fellow 2016-17. She will be convening a series of seminars with Dr Heather Webb to be held at CRASSH in Michaelmas 2016.

Whilst the Middle Ages were influenced by certain Greek philosophical traditions which regarded truth and science as an abstraction from matter, time, body and contingency, at the same time, however, the central doctrine of Christianity, that of the Incarnation, suggested that truth has been fully manifested in one particular time, as one particular embodied person. Here, truth is as much a performative manifestation as it is a theoretical indication of the universal. It also consists in Christ's deeds and gestures (for example, on Maundy Thursday) as much as in his words. Later Christian thought tended to resolve this tension in terms of a sharp distinction between natural and supernatural levels of understanding. But this was much less true of earlier Christian thought which made no abrupt distinction between philosophy and theology, as between the physical senses and metaphysics. Hence, the Greek pagan and Biblical traditions tended to be seen as mutually interfering. Furthermore, the notion of a ritual and performative dimension to truth was not wholly alien to the former tradition, as for theurgic Neoplatonism, elements of which were blended with Christian thought in Pseudo-Dionysius, Boethius, Maximus, John Damascene and Eriugena.

Our project seeks to investigate this mutual interference in the High to Late Middle Ages. We propose to investigate the ways in which attention to the link between physical perception and bodily gesture, on the one hand, and metaphysics, on the other, might yield a new understanding of Anselm’s Proslogion, a discourse long seen as part of the canon of a priori philosophy of religion; and, in the case of Thomas Aquinas, such an approach suggests that the realisation of truth becomes, still more than for Aristotle, a performative event as the utterance of an inner word expressing truth, and a concomitant return to an imaginative invocation. This model of understanding explicitly mirrors both the generation of the divine Word from the Father and its birth on earth from the Virgin. We will investigate this treatment of truth with reference to the Summa Theologiae and in Aquinas's Commentary on the Gospel of John. Truth here has become theologised as event. But does it also thereby become theologised as outwards corporeal gesture? We will explore whether this dimension of the re-conceptualisation of truth and knowledge is more manifest in the devotional writings of Catherine of Siena and the literary work of Dante. In the Vita nova and the Commedia, gestures tend both to disclose new truth to Dante and to lead him upwards to further disclosures. Equally, literary sources seem to indicate a spiritual seeing that is also corporeal, even if the philosophical tradition, as seen in Anselm and Aquinas, among others, view knowledge as a kind of refined sensing and especially seeing. Does one find in Dante a more theophanic level of divine manifestation in physical symbol and irradiated body, as for Eriugena (who was often read secretly), who follows the Christian East, whereas the West tends to lose this emphasis? Here, to know is to see also with the body, and to see integrally is to be transfigured, in such a way that the seer becomes herself performative manifestation.

Catherine Pickstock is a Professor of Meetaphysics, and Poetics Fellow and Tutor at Emmanuel College, Cambridge.

Her research interests include:

She has written, co-written and co-edited several books, and published numerous articles in the area of philosophical theology. Her current project is a book entitled Theory, Religion and Idiom in Platonic Philosophy. 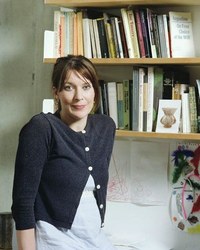