Religion, Community, and the Working Classes of Bengal

My project is a book on subaltern identity, social mobility and religion in the last forty years in Bangladesh and West Bengal. Based on interviews with individuals from resettled and marginalised communities, I will explore what working class Bengalis from the borderlands mean by a Bengali/ Bangali/ Bangladeshi identity. Through a study of the resettlement of refugees (on the two sides) to frontier and ‘wild’ zones, my aim is to explore links both to a complicated Bengali/Bangali identity and to Dalit Bengali Hindu / Bengali Muslim / Minority politics in both Bangladesh and West Bengal. This book has three parts. The first deals with ‘flights and movements’ or how the history of both Bengals has affected the working classes. In this part I look at the aftermath of the Bengal Partition, the mass migrations, the treatment of subaltern communities on both sides – whether the East Bengali refugees in India or the Biharis in Bangladesh. The second part closely looks at social distinctions and their formations, asking questions such as what is the importance of language and literature in the making of class distinctions? The third part of the book will be concerned with religion and will address the following questions: if previously we could talk of a distinct Bengali Hinduism and of a separate Bengali Islam, can we still do so today? What has been the role of migrant workers who live in the UK or the Gulf in the transformation of religious practices? Why has religion become such an important marker of identity on either sides of the border today?

Annu Jalais is a Visiting Fellow at CRASSH, Easter 2012.

Dr Annu Jalais is currently a research Fellow  at the Jawaharial Nehru University in New Delhi.  Previously she was a Research Fellow at the International Institute of Social History, Amsterdam, working on West Bengali and Bangladeshi archives.  After being awarded her PhD in Anthropology at the London School of Economics in 2004 Dr Jalais was a Tutorial Fellow with them from 2005-2007.  She was also a Lecturer at Goldsmiths, University of London for a period of time  Her publications include Forest of Tigers: People, Politics and Environment in the Sundarbans,  Routledge: New Delhi, London, New York (2010), with forthcoming  Eighteen Tides and a Tiger (working title). Creative non-fiction based on her travels through Deltaic Bengal (both Bangladesh and West Bengal) Penguin: New Delhi, New York.  She is  co-author with Joya Chatterji and Claire Alexander, The Bengali Muslim Diaspora: Migration, Displacement and Settlement in Bangladesh, India and Britain.(Forthcoming: 2013). 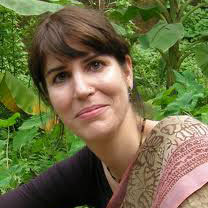