Dr Alexander Görlach is a Visiting Fellow at CRASSH in Easter Term 2018.

An Inclusive Concept of Abendland
Western societies struggle for their identity. Starting with 9/11 the clash of civilizations, as predicted by Samuel Huntington, seem to have come at hand: how to combat global terrorism conducted in the name of an ideology that seem to be much stronger than the liberal promise of Western democracy and lifestyle?
Globalization and digitalization have made Western men mad as well. How to compete against the learning capacity of artificial intelligence and the force of automatization? The free flow of information, ideas and people have challenged and questioned local identities. In the West almost all countries face a new wave of right wing populism, derogating immigrants and opposing open market economy. The whole Muslim word on the other hand is on fire: From Nigeria to Malaysia the faithful get exposed to the multitude of religious interpretation and lifestyles. This creates a pressure from the inside, upheaval and war. And from the outside the West challenges the view of an always triumphant Islam. The West can only escape from the era of identity, as this epoch will be called by later, by concentrating and re-focussing on its strength.
While nationalists and right-wing populists offer answers from the past, Europe has to remember its strongest concept to tackle both the danger from these populists and extremists from outside its shores: the Abendland. The concept of a humanist, Christian continent, laid out by such thinkers as Erasmus of Rotterdam is still valid. It is today mostly politically embodied in the European Union, yet without any "flesh on the bone" when it comes to symbolism and a story to believe in. The European Union rightfully wanted to exclude any nationalist and religious narrative for its future, for those two have been responsible for most the most devastating of disasters in the past.
However, the concept of the Abendland is inclusive and diverse, for it acknowledges the regional differences of its Western adherents and it is at the same time open to its sister, the Morgenland. The Abendland narrative, that has been taken hostage over time by mostly right wing protagonists, needs to be recuperated by the Europeans of good will and be offered as a concept that is worth to believe in and fight for. This argumentative writing will make the case for this view and vision of Abendland.

Alexander Görlach is a In Defense of Democracy Affiliate Professor of the F.D.Roosevelt Foundation at Harvard College and an affiliate to the government department at Harvard University. He is further a senior fellow to the Carnegie Council for Ethics in International Affairs and a senior advisor to the Berggruen Institute. Prior to his current engagements at Harvard Alex was a visiting scholar, J.F. Kennedy Memorial Fellow and guest lecturer to both, Harvard's Center for European Studies and Divinity School.
Alex holds  PhDs in comparative religion and in linguistics. He studied at al-Azhar University in Cairo and the Papal University Gregoriana in Rome and he researched at the Faculty of Theology at the University of Ankara. In his work Alex looks into political and religious narratives, how they shape identity and influence policy making. Alex aims to draw the big picture when it comes to identity: at Harvard he looks, together with faculty professor Daniel Ziblatt, into the concept of Abendland (Occident). With Carnegie he highlights the influence of Latin America on the concept of the West. And with the Berggruen Institute he works on Confucianism and its influence in the narratives of Asia. It is with the support of the Berggruen Institute that Alex lectures in the capacity as visiting scholar in the academic year 2017-2018 at National Taiwan University in Taipei, City University Hong Kong and Seoul National University, in South Korea. While at CRASSH Alex will continue his work on the concept of Abendland and put it in perspective with his findings in Asia and Latin America.
Alexander Görlach is known as the founder, publisher and editor in chief of the debate magazine The European, which he ran from 2009 until 2015. Today Alex publishes the online-magazine www.saveliberaldemocracy.com. He is, amongst others, an author to the New York Times and the Neue Zürcher Zeitung. 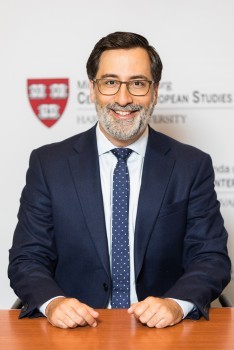