Join us for this online event with our first two Nine Dots Prize winners, James Williams and Annie Zaidi. We will be asking them what it feels like to win the Prize, and to know they then had to write a book in such a short time. They will also discuss where they found their inspiration for their responses to the Prize and how they researched their ideas. We will also be asking them how it has been for them since winning the Prize. This event will be relevant for all those thinking of entering the Nine Dots Prize, but also those who are interested in creative thinking and writing about issues facing modern societies.

We will be collecting questions for our winners on the Nine Dots Prize Twitter account (@NineDotsPrize) in the run up to the event, through the Questions & Comments box on the registration form, and via the chat function during the conversation.

James Williams won the inaugural Prize in 2016 when he answered the question: Is digital technology making politics impossible? James was a PhD student at Oxford University researching digital ethics after working for Google for ten years. His book, Stand out of our Light: Freedom and Resistance in the Attention Economy, was described as a ‘landmark book’ as it argues that the digital attention economy represents a new form of political power, one that subjects us to a sort of ‘attentional serfdom,’. Reforming it, Williams says, may be the defining moral and political task of our time.

Annie Zaidi won the Prize in 2018 when she answered the question: Is there still no place like home? She is a writer, journalist and playwright based in Mumbai. Her book, Bread Cement Cactus: A Memoir of Belonging and Dislocation, was described as ‘a profound journey through memory, language, land and culture’.

Anne Applebaum (Chair) is a staff writer for The Atlantic and a Pulitzer-prize winning historian. She has been a member of the Nine Dots Prize Board since 2018. Her most recent book is Twilight of Democracy: The Seductive Lure of Authoritarianism. 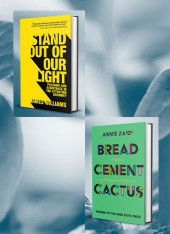