Due to unforeseen circumstances this session has been cancelled. Apologies for any inconvenience caused.

Open to all. No registration required.
An event organised by Solidarity across Difference – Theory and Practice Network
Administrative assistance: networks@crassh.cam.ac.uk 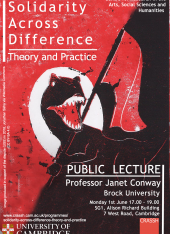