This seminar brings together current graduate researchers from the Department of Architecture to question the influence of building design and occupants on achieving sustainable built environments. While the speakers’ research contexts and building typologies vary, the work is unified by an interrogation of the role of the occupant in the sustainability agenda and the occupants’ subjective assessment of their built environments. Across all building typologies, built environments can be designed to so-called sustainable standards, however the people who eventually occupy such environments have a significant influence on its performance. Drawing from the diverse research approaches, the seminar questions the narrow technological focus that has dominated the debate of what is ‘sustainable architecture’ in an effort to highlight the complexity of the sustainability agenda, the possibility of ‘sustainable architectures’, and reclaim some ground where sustainability is viewed holistically within specific socio-cultural contexts.

Matthew Anthony French
The complexity of comfort in self-built ‘slum’ and government housing: a case study from Argentina

The research aims to investigate how variations in urban form influence the thermal environment within high-density tropical housing.  High-density cities emerge in the tropical region to accommodate population growth partly due to rapid urbanisation.  Their urban forms have been continuously shaped by multiple forces such as social, aesthetic and economic considerations. The resulting urban form is expected to create a microclimate that is distinct from the ambient condition. Such effect is particularly complex for high-density housing since closely-packed buildings substantially influence each other and multiple dwelling units exist in the same building.  A better understanding of this phenomenon is expected to facilitate more informed decisions on the way high-density urban form should be shaped in the tropics.

The research first identifies common morphological variations in high-density housing by using Singaporean public housing as a case study and tracing its evolution from 1960 to now.  Generic urban forms are then constructed to represent these morphological variations while holding other factors constant.  For each generic form, computer simulations are performed to estimate the amount and distribution of solar irradiation on building facades – a major source of heat gain in tropical buildings.  A survey is also conducted to understand the significance of the effect of urban geometry to the ultimate thermal comfort and electricity consumptions of households in reality.

The British government has set the target of reducing CO2 emissions by 60% by 2050. In order to reach this target, different institutions are developing guidelines for energy efficient designs to be incorporated in the building industry of housing. However, despite all the efforts that can be put in the design phases of new low-carbon houses, there is proved evidence that the occupants’ behaviour might drastically change the energy performance intended by design. By means of computational dynamic simulation, this research explores the causes of users’ sub-optimal behaviour, presenting a quantitative and comparative analysis of the impact that different actions might have on the energy performance of a prototypical low-carbon dwelling.

Matthew Anthony French
The complexity of comfort in self-built ‘slum’ and government housing: a case study from Argentina

Dwelling performance is found to strongly relate to bio-climatic design influences, primarily construction materials and quality. The study finds that while the typologies are easily ordered according to objective temperatures, residents’ responses to such conditions are much more complex. Thermal comfort is achieved at a much wider range of temperatures than reported in previous studies, challenging previaling stereotypes of comfort and satisfaction  in informal settlements and Western notions of thermal comfort.  The findings challenge the general assumption that formally procured, architecturally designed, and contractor-built housing provides significantly higher standards of thermal performance than irregular self-built dwellings. The findings support the theoretical argument that conceptualizes thermal comfort as a social phenomenon rather than a purely physiological response to certain environmental conditions. This argument challenges the prevailing standards, which are based on the physiological model, that are extremely resource intensive to maintain 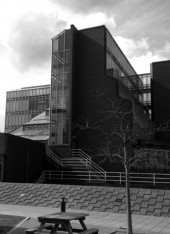 Climate for Architects and Urban Microclimate

Sustainability in the Built Environment.

POSTPONED-Sustainability in the Built Environment

Power to the People?

Understanding and Addressing the Performance Gap 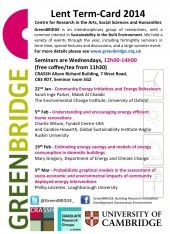 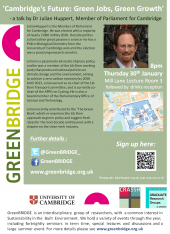 CANCELLED (Power of the People?- GREENBRIDGE) 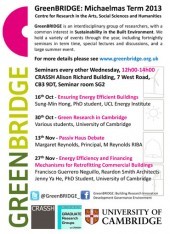 Community Based Social Marketing and Environmentalism: Engagement with a New Generation of Green Policies

Modelling Energy Use in the UK Housing Stock

Cancelled- Aspects of Public Art, the Built Environment, and the Communication of Values

Sustainability Measures in Universities: Cambridge as a Case Study

Towards Zero Carbon 2012-2016: A Turning Point in Building and Masterplan Design

Nature, Carbon and the Church

Behaviour and Energy Use

Sensing the Historic Environment – Its Nature and Relevance

This session has been postponed until next year.

Qualitative Methods for Technical Topics I: A Survey of Local Practice

Sustainable Design: From Theory to Practice

How to Enhance Value to Historic Context Through Contemporary Inventions

Energy Consumption from Dwellings: Do we understand it?

Heritage and Future Cities: Lessons from the Past for a Sustainable Future

Scenarios for Strategic Planning in the Built Environment