What was lost in Dallas

When he came to speak, the phrases cutting through the Boston drawl were those of a man who understood the emotive power of words, and knew an elegant sentence when he read one.

John Naughton was the Observer’s Television Critic from 1987 to 1995. This is a column he wrote in 1993, reviewing two BBC documentaries about the assassination of JFK.

I saw Jack Kennedy once, in the flesh, at close range. It was during his visit to Ireland in 1963 and my father – who had been responsible for some of the arrangements – had wangled a good viewing position for me. For a brief period, long enough for every detail of the scene to be etched onto the memory of an impressionable schoolboy, the President stood about 15 feet away from me.

Over the years, it has become de rigueur for members of the chattering classes to distance themselves from the Kennedy phenomenon, to attribute their past infatuation with Camelot-on-the-Potomac to the naiveté of their youth. The piles of revisionist scholarship and muck-raking journalism encourage us to disown the hopes once aroused by Jack Kennedy's presidency. Like rejected lovers, we come to resent the extent of our original passion, and to be embarrassed by anniversaries and other reminders of it. 'I remember,' says the chap in a smart contemporary cartoon, 'exactly what I was doing when I was first asked if I could remember exactly what I was doing when President Kennedy was shot.'

But I cannot erase the impression that Kennedy made on me that mild Irish day. I had never before seen anyone like him. He was tanned, lithe, alert. He seemed unbelievably glamorous. He had a marvellous smile, which first flickered, then exploded into life. He looked both relaxed and wary as he listened to the rambling tributes of local dignitaries. When he came to speak, the phrases cutting through the Boston drawl were those of a man who understood the emotive power of words, and knew an elegant sentence when he read one.

To my eyes he seemed the embodiment of impossible dreams – that political leaders should be young and vibrant; that firmness could be combined with compassion; that there was a place for literacy in the councils of government; that perhaps power did not always corrupt.

Naive? Sure. I was dazzled by what Henry Kissinger later described as the aphrodisiac effect of power. But it's what I felt on the day. And it's why I found Who Shot President Kennedy? (BBC2) so distressing. What bothered me was not the conjectures about the Warren Report rehearsed by Walter Cronkite but seeing the movie footage of the life, which had so touched me as a boy, being snuffed out by an explosive cauliflower of blood and brain tissue. That and the black-and-white photographs from the autopsy showing that even on the slab Kennedy retained something of his taut dignity.

To balance this picture of JFK in death, BBC2 screened two remarkable documentaries showing him in life. One dealt with his victory over Hubert Humphrey in the Wisconsin primary; the other covered the confrontation between his Administration and Governor George Wallace over the registration of two black students in the University of Alabama. In their time, both were path-breaking films because they pioneered the verité techniques we now take for granted, and because they took film (and therefore television) into areas of public life where it had previously feared to tread.

In their different ways, the two films showed the two sides of Kennedy – the ruthless machine politician and the dignified president. The Wisconsin film showed Jack and Bobby pressing the Catholic flesh, and Bobby collecting dollar bills like a vacuum-cleaner. The Alabama film focussed on the brothers' search for a strategy to outface Wallace without going over the top. It closed with the speech Jack made to the nation on the subject.

'We are confronted,' he said, 'primarily with a moral issue. It is as old as the scriptures and as clear as the American constitution. It is whether all Americans are to be afforded equal rights and equal opportunities; whether we are going to treat our fellow-Americans as we want to be treated. If an American, because the colour of his skin is dark, cannot enjoy the full and free life which all of us want … then who among us would be content to have the colour of his skin changed and stand in his place? ... This nation, for all its hopes, and all its boasts, will not be fully free until all its citizens are free.'

It's easy now to dismiss this as mere rhetoric. After all, Kennedy didn't compose it – like all presidents, he had teams of speech-writers. Why is it, then, that his are the only presidential speeches that most of us can remember or quote? It is partly because he employed classy writers. But it is mainly because the man himself had class.

Once, he gave a White House dinner for all the American Nobel laureates then living. At coffee, one of the guests said to him: 'Mr President, there must be more intelligence gathered under this roof tonight than ever before'. 'Yeah,' replied Kennedy, 'except when Thomas Jefferson dined alone.' It is when you put this remark against the collective wit and wisdom of Johnson, Nixon, Ford, Carter and Reagan that you begin to get the measure of what was lost on that grim November day in Dallas. 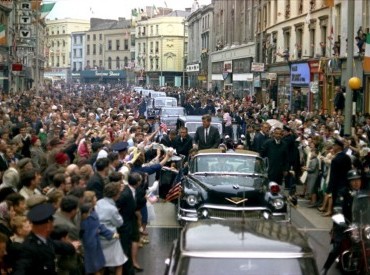