We were in the presence of someone who loved her work, who loved this work, and expressed that with bubbling joy.

The mesmerizing illustrated lecture on Friday by the current Humanitas Visiting Professor, Mitsuko Uchida, fell sharply into two parts. In formal terms, this is obviously true: the first part was a recital, in which she played Beethoven’s Diabelli Variations in their entirety; the second was an informal lecture in which Uchida frequently turned to the keyboard to illuminate her points – really more of a conversation between woman and piano.

But the bifurcation was perceptible at a deeper level as well. Uchida’s Diabellis were, as her legions of admirers would have expected, pretty much impeccable. Her touch has extraordinary clarity; it was shown to exquisite effect particularly in the two fugue variations, the penultimate allegro and Variation 24, the fughetta. This last showed surpassing delicacy; it later emerged that it was the first variation she had learnt. Uchida’s dynamic range runs from the merest pianissimo stroking of the keyboard (Variation 8, poco vivace) to aggressive sforzandi (Variations 13, vivace, and 23, allegro assai). My neighbour jumped out of her skin at one particularly startling contrast. Yet the overall tenor of the performance was serious, even fiercely so. Magisterial. Maestoso.

The tempo for Uchida in conversation, however, would be allegro giocoso. That she thanked us at the end for listening to her talking ‘garbage’ belied the fact that we had spent the previous hour spellbound by a torrent of playful erudition. We were in the presence of someone who loved her work, who loved this work, and expressed that with bubbling joy. We had, in fact, heard hints of this in the first half, above all in the twinned variations (16 and 17) at the exact centre of the Diabellis. The second of these, I don’t know how, seemed like a peal of laughter. And the Mozart echo (22) was played with just the right amount of parodic humour.

Most readers will know that the thirty-three variations were based on a theme composed by a music publisher, the eponymous Diabelli, and given to famous composers to develop, as a cynical marketing ploy. A ‘mere next to nothing’, said Uchida; ‘deeply unmusical’ (several times). Yet she built for us an abiding aural image of how Beethoven played with that theme, pressing its infelicities and peculiarities ad absurdum (compare the turn at the beginning of the theme with the repeated motif of Variation 9) – and yet somehow making from them extraordinary music. After Uchida’s exposition, Diabelli’s own piece no longer seems a clunky, clumping little waltz; it becomes a set of notes pregnant with possibility.

I hope Mitsuko Uchida will forgive me if I say that one of the most memorable visual images of the evening was when she turned to the piano to demonstrate the oompah – the heavy inverted fifth that also underpins Diabelli’s ‘deeply unmusical’ theme. Her whole body language changed, and one leg stuck straight out: one could almost see a clown’s elongated shoe on the end of it.

The performance of the Diabelli Variations was, as I have said, exquisite. With Uchida’s personality brought to the foreground, it became exquisitely memorable. That combination of the magisterial and the playful seems to me what makes these Humanitas lectures unique – and unmissable. 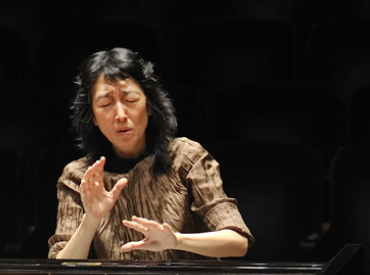