Human extinction and the probability of a coming global catastrophe, either nuclear or environmental, are not just a problem for scientists, policy makers and elites, they are a problem for all of us.

According to the Bulletin of Atomic Scientists the world is stuck in a new abnormal, where we remain as close to an existential catastrophe as we have ever been – two minutes to midnight. In the 1950s, the last time we faced such peril, this risk came from a world conflict in which generals and politicians were willing to play with the future of the planet in order to secure military and political advantage. However, in 2019 we face a new landscape of risk driven by ignorance as much as strategy.

The Bulletin this year highlighted two key threats the world faces. On the one hand, nuclear weapons remain far too numerous for comfort, with the potential for nuclear tensions to turn into a global catastrophe. As Former Governor of California Jerry Brown pointed out in responding to the Doomsday Clock, much of this risk now comes from the potential for accidental launch. In addition to the longstanding threat that nuclear weapons may be launched by accident or as the result of a false alarm we now face even more challenges because the policy makers who will ultimately decide whether nuclear weapons get launched are increasingly faced with a news and intelligence environment that cannot be secured against cyber-attack and coordinated disinformation.

Meanwhile, climate change is an existential threat due to its capacity to disrupt the fragile global systems on which we depend. Yet, we are not taking the actions that we know we must, and that international governments have agreed to, because of a wilful blindness to the facts and their significance. For example, in her response to the announcement, Susan Solomon pointed to President Trump’s recent dismissal of a scientific analysis of climate change from his own staff on the basis that 'I don’t believe it'. Once again it is the prevalence of misinformation and bad epistemology that are fuelling this new abnormal.

Yet, the Doomsday Clock, the most well-known assessment of the level of existential threat facing humanity, is far from perfect. It is the considered judgment of a panel of experts. The fact that the clock has remained at the same time as it was in 2018 should not be understood as giving any great degree of certainty that the level of risk is not rising. The study of existential risk is a science in its infancy. I am proud to be a researcher at the Centre for the Study of Existential Risk who are helping this science grow.

However, as the Bulletin’s announcement indicates, the conditions that are driving this risk in 2019 strongly mean that even were we to achieve a well-developed science of the threat that we face, and to understand everything that is needed in order to mitigate these and move towards a safer world, this may not be enough. The challenges that are preventing us from bringing about the changes that we need to get us further from midnight are as much cultural and political as they are scientific.

Human extinction and the probability of a coming global catastrophe, either nuclear or environmental, are not just a problem for scientists, policy makers and elites, they are a problem for all of us. We have the power to affect how our leaders make their choices by holding them to account for their willingness to accept that there is such a thing as scientific truth and objective reality, and that we ignore these at our peril. This should not be a matter of political disagreement, it is the very foundation of our safety and our future. 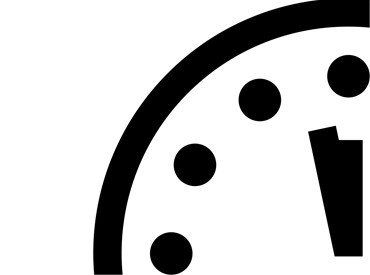