Those of us lucky enough to be there heard the quartet mature in a matter of hours: under Perahia’s guidance, the interpretation grew and changed as we listened.

A couple of weeks ago, there appeared an article on the music pages of the New York Times entitled ‘Wait, you need to suffer some more’. It discussed the tendency of even the greatest performing artists to postpone engagement with certain works until they felt – in essence – that they had lived enough. Needless to say, the works most often cited as overwhelming were late Beethoven.

But late Beethoven is what the young Doric quartet gave us at their master class yesterday afternoon: the opus 130 quartet, complete with the Grosse Fuge (op. 133). And those of us lucky enough to be there heard the quartet mature in a matter of hours: under Perahia’s guidance, the interpretation grew and changed as we listened.

Having said this, the proceedings started with a performance of the work so accomplished that I wondered where Perahia would intervene. His method proved to be twofold. First, he produced vivid emotional narratives to accompany the music; second, he broke down the unbelievably complex score into its harmonic essentials, and showed how they gave structure and direction to its elaborations.

For example, Perahia talked about the ‘struggle’ represented by the Grosse Fuge, the pain and striving, in contrast to the happiness, gratitude, buoyancy (my word, not his) conveyed by the rest of the score: he illustrated it by analogy to the beginning of the last movement of the ninth symphony, ‘O Freunde, nicht diese Töne’. He spoke of the dotted rhythms as representing a man fighting God, questioning the very fabric of creation. At the same time, he talked about the significance of Beethoven scoring tied quavers instead of crotchets; he exposed the basic harmonic structure of the beginning of the fugue, a bell-like sound of falling thirds; he talked about dissonance in the basic context of an affirmation of tonality, always seeking eventually to resolve. Each time the quartet took up one of his suggestions and replayed a passage, the musicality of their rendering changed and grew.

The narrative for the first movement was one of spring-time: of looking at nature, and of the soul in harmony with nature. A concordant luminosity crept into the quartet’s playing. The presto was already unbelievably light and swift, a glancing spring breeze; Perahia slowed the tempo down a fraction, and the music breathed. The movement to which Perahia’s narrative made most immediate difference was the third. He invoked Schumann’s song, ‘Mein Wagen rollet langsam’, and played a snatch of it on the piano: all of a sudden, the staccato semi-quavers in the cello line had direction and humour.

Perahia’s narratives were so passionately spiritual that at the end an audience member asked about his reading. His answer was fascinating. He was not a religious man himself, he said, but he found a religious reading ‘a way of transcending the mundane’; moreover, religion was an ‘obsession’ for Beethoven in later life, from the Missa Solemnis onwards, so the interpretation respected Beethoven’s preoccupations. We had clearly in some part had the privilege of listening to Perahia ventriloquizing Beethoven.

Perhaps one does indeed need to have lived a long, hard life fully to interpret late Beethoven. But with guides as generous as Perahia to learn from, why should one put off performing it?

Information about the concert by the Doric Quartet can be found here. 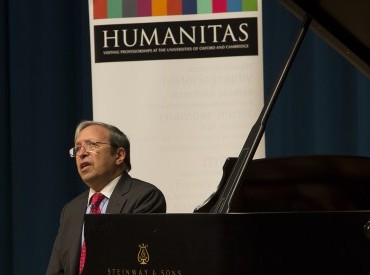