Global crises and catastrophes can remind us of our common humanity and of our capacity for generosity and solidarity, and renew our aspirations and dedication

Shortly before the coronavirus shut down the university and much of the world, we organised a conference, Cambridge: City of Scholars, City of Refuge, 1933-1945.  Co-sponsored by CRASSH, Trinity College, and the Jewish Historical Society of England, and organised in association with the Insiders/Outsiders Festival, the conference brought together a stellar group of scholars and scientists to begin to tell the story about the way Cambridge – university, colleges and city – became a haven for refugees from Fascist Europe in the years 1933-45 (we were inspired in part by a recent book that tells a similar story for Oxford).

Some participants spoke about individual refugees – both academic superstars (the molecular biologist Max Perutz, the sociologist Karl Mannheim, the medievalist Walter Ullmann) and the marginal or nearly forgotten (the philosopher Rose Rand, whom Ludwig Wittgenstein supported anonymously). We heard papers about Jewish scholars fleeing Nazi-occupied Europe (the historian Samuel Krauss) and artists fleeing Franco’s Spain (the composer Roberto Gerhard). We learned about the refugee experiences of women scientists, art historians, and a German avant-garde choreographer (Kurt Jooss). Participants also spoke about individuals and organisations that played vital roles in supporting academic refugees (Robert and Sybil Hutton, Herbert Loewe, the Cambridge Refugee Committee, the Strangeways Institute) as well as particular Colleges that did so: Trinity, King’s, Caius, Girton, and Peterhouse (which welcomed the LSE for the duration of the war).

We heard about successes but also about failures: both the evacuation from Frankfurt of the invaluable music library of Paul Hirsch, and Herbert Loewe’s heroic, ultimately unsuccessful attempt to evacuate the Hochschule für die Wissenschaft des Judentums from Berlin to Cambridge.

And we launched a book about the extraordinary household at 9 Adams Road, where Alice Roughton began to welcome refugees in the 1930s, and which has remained a welcoming haven to academics and others ever since (Alice’s son Geoffrey presented the first copy to Nicolas Bell, librarian of Trinity College).

On the Thursday evening, we were welcomed into the Master’s Lodge at Trinity to hear from Stephen Wordsworth, director of the Council for At-Risk Academics (CARA), about the extraordinary work that that organisation, founded at Trinity in 1933 as the Academic Assistance Council, continues to do today. And we heard a magnificent keynote lecture from Lord Krebs about his father, Hans Krebs, who played such a central role in the story of scientific refuge from Nazi-Europe to Cambridge and Britain in the 1930s, and about the fellowship in his memory that continues to support persecuted scientists to this day.

A final roundtable reflected on the differences and commonalities in the experiences of exiled scholars, scientists and artists, and the meaning of telling this story now, as it passes from living memory to history (the large audience included both children and former students of refugee scholars). And we reflected on what lessons the university can draw from this riveting history for our time, which has seen its own refugee crises and in which academics continue to be at risk from authoritarian regimes as nearby as Turkey and Hungary.

Looking back on it now, with the hindsight and experience of COVID-19 and more than two months of lockdown, we realise all the better – without comparing the incomparable – how our conference was about something else as well: the way an academic community can come together in a moment of global menace; how, in turn, such a threat can foreground and inspire the ideals of a community of learning, indeed of universitas, the common purpose of the free human search for knowledge and wisdom. We knew this story had global consequences that far transcended local history: after the war, many refugee academics from Europe who had found safety in Cambridge would go on to transform and even create entire disciplines. What will the world look like after our current global crisis, and what role will the university play in shaping it? We don’t know yet, but the story that our conference has begun to tell – as another CRASSH project about exile and scholarship, knowledge and migration has done – shows that we have a hand in making that world ourselves. Global crises and catastrophes can remind us of our common humanity and of our capacity for generosity and solidarity, and renew our aspirations and dedication.

Theodor Dunkelgrün is Senior Research Associate at CRASSH, Affiliated Lecturer in the Faculty of History and Senior Postdoctoral Researcher at Trinity College.

Aaron Kachuck is Junior Research Fellow in Latin and Neo-Latin Literature at Trinity College and the postdoc lead for Arts and Humanities on the University’s Public Engagement Advisory Group.

Further recordings of the conference can be viewed on the CRASSH YouTube channel. 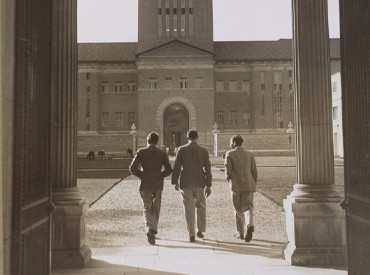