The flattened and reflected imagery plays on the idea of image reduced to product.

Beauty Salon examines the very feminine subject of beauty in a visceral and challenging manner. The paintings and sculptures in the exhibition investigate the work that goes into achieving and maintaining the surface of appearance by confronting, critiquing and celebrating the ritual and routine of beauty. Alongside this, the artists foreground and unpick the resulting display of beauty as promoted by fashion, film, television, art, advertising and social media. As well as the artworks there is a compilation of film clips that foreground the beauty salon and the beauty business.

I am currently doing a PhD in Film Studies at Queen Mary University of London in which I am looking at the role makeup plays in forming the female star image. This picks up on my work as a makeup artist, which is what I did before becoming a painter. While doing research for my PhD I became interested in the mechanics of beauty – that is the way that makeup is applied, how the body and face are conditioned in beauty treatments and above all how this is depicted on film. Alongside this there is a similarity between the way art is made and the way we style our faces and body – that is using materials to produce a finished look. I find that paint, in particular, is quite a magical medium and is applied to a surface just as makeup is applied to the face. I asked Jennifer and Alli to make work for the show because I thought the theme would be interesting to them and seemed relevant to their practices. 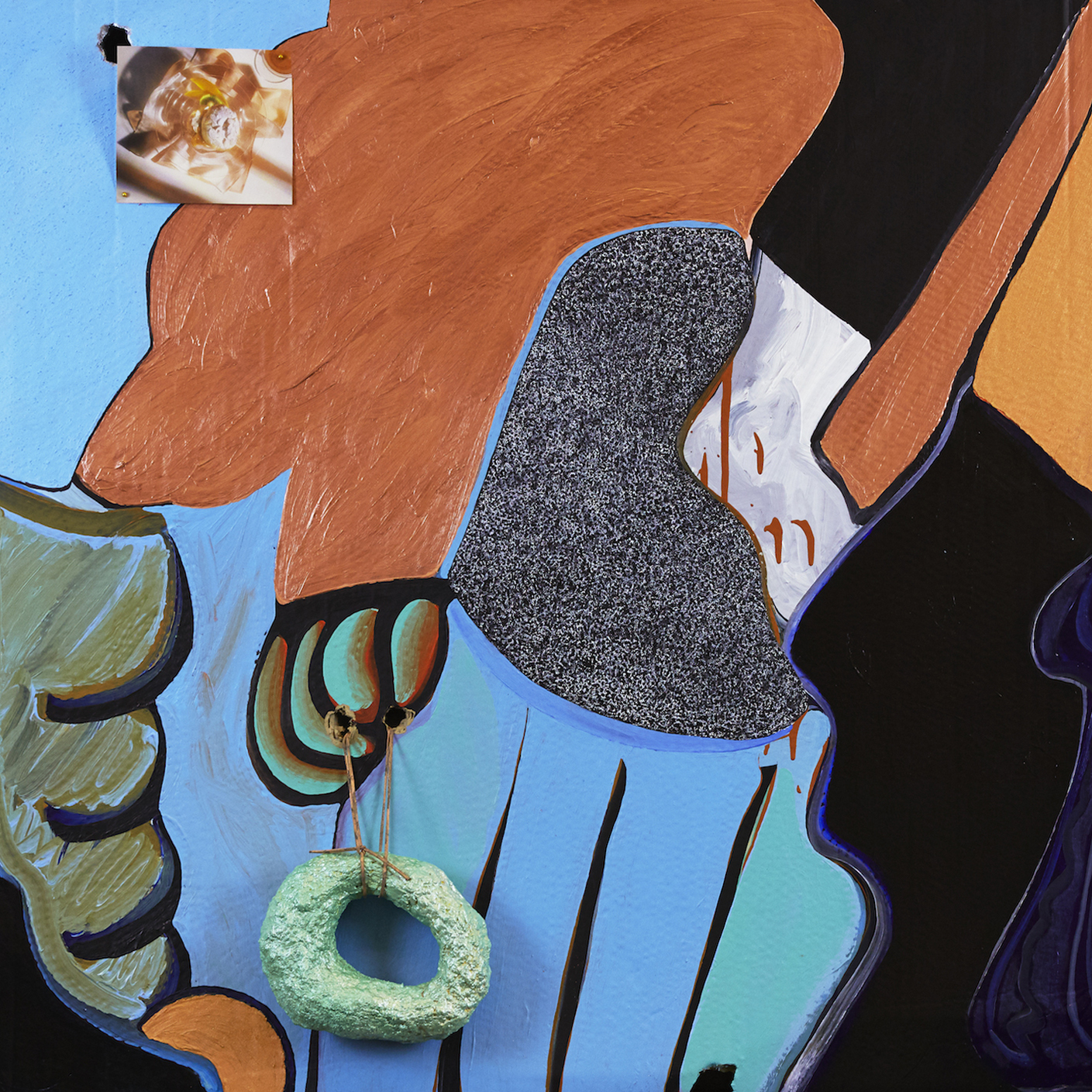 My artworks document an obsession with surface colour, yet my personal approach to makeup is quite masculine and almost chromo-phobic.
Jennifer Campbell

Q: Who are the artists in the exhibition?

Jennifer Campbell uses paint as a transformative medium, almost like stage makeup, which she says she ‘slathers onto shabby materials’ such as discarded polystyrene or paper pulp. Her work hovers in the space between abstraction and figuration, utilising poppy elements to tell complex contemporary stories. Campbell has had solo shows at Outpost Gallery, Norwich (2018); Marcelle Joseph Projects, London (2015) and Hello Everything Gallery, Bristol (2010). Recent Group exhibitions include: Loose Certainties, Transition Gallery, London; The Conformist, Belmacz Gallery, London; Jeune Creation, Gallery, Thaddaeus Ropac, Paris. She was selected for the 2015 Catlin Guide and was winner of the 2013 The Barbican Arts Group Prize. She completed an MFA at The Slade School of Art in 2014 where she was recipient of a full AHRC scholarship and the Jeremy Cubitt Prize.

Cathy Lomax is interested in the seductive imagery of popular culture and in particular how it is constructed, consumed and related to. Her recent paintings examine femininity and in particular masquerade theory and often feature mirrors and reflected imagery to investigate looking and being looked at. Lomax was an Abbey Painting Fellow at The British School at Rome in 2014 and winner of the 2016 Contemporary British Painting Prize. She is currently researching the role of makeup in the creation of the female film star image for a PhD in Film Studies at Queen Mary University of London. Her recent exhibitions include Made in Britain, National Museum, Gdansk, Poland; Painting on Paper, Yantai Library and Art Museum, China; A Gown by Orry-Kelly, Transition Two, London; The Blind Spot, Swindon Museum and Art Gallery.

Cathy: I have become interested in the way makeup is marketed and advertised, particularly in the mid to late 20th century. For Beauty Salon, I made a series of small works on paper caller Beauty Grabs, which are derived from these adverts. The works are made using different paints and mediums to produce an environment of different textures. The small works are installed in such a way that they become a larger work with a formal rhythm made up from the individual paintings. My other works in the exhibition include two installations on plinths - Type: Icy Blonde and Type: Unreadable. These derive from my interest in how women are reductively categorised as types (this was particularly true of Hollywood stars) and feature images of film stars Catherine Deneuve, Ingrid Thulin and Eva Marie Saint. The flattened and reflected imagery plays on the idea of image reduced to product. The paintings Dangerously Shiny and Beautiful in Basalt deal with a similar idea – that of idealised images of women. When beauty becomes fixed in stone it becomes easier to control – it is halted and static and has little to do with the messiness of a living person.

Alli: I worked through many different ideas based on my own relationship with beauty before arriving at the Chippy paintings. I was thinking about identity construction and our desire to present versions of ourselves (in life and online) to others, and how cosmetics help us express how we identify with one group or another. I love the way chipped nails look – they suggest the aftermath of a glamorous occasion, an interesting back-story or an alternative anti-beauty attitude. I like a good manicure too, but the polished surface is a temporary state that always ends up chipped. Perfection is unachievable, life gets in the way and so the cycle is repeated endlessly. The hand gestures seemed suited to the attitude imbued in the chipped nails – a two-finger salute to the conventions of beauty. Having said that, ‘fashionably chipped nails’ have been consumed by the beauty industry too and made their way down the runway last year (Jin Soon for Tibi). I have also been taking sneaky photos of girls doing their makeup on the train to work in the morning. It’s fascinating to watch them use the crowded public space as a private beauty salon. I’m not sure if the photos will be an inspiration for paintings yet, but some of them feature in our Beauty Salon zine.

Jennifer: I always think through making and I began this body of work expecting that it would mainly investigate the trappings of femininity. However, as is often the case, the work diverted my thoughts along a less dogmatic path ending in psychedelic-tinged dichotomy. My artworks document an obsession with surface colour, yet my personal approach to makeup is quite masculine and almost chromo-phobic. So when I was asked to make work for Beauty Salon I decided to collaborate with a past self, who had a different relationship to makeup and beauty products. I remembered that around at the age of 12 or 13 I was quite obsessed with makeup, leafing through girl’s magazines to drink in the highly staged photographs of crushed shimmery eye shadow and glittery peach lip-gloss smears. Unaware of the perils of gender stereotypes and excited by the idea of magical transformation I spent my pocket money on cheap items full of supernatural promise. I distinctly remember an iridescent baby blue lipstick, another lipstick that was half black and half pearlescent white and a spectrum of nail-polishes, always with a layer of glitter gloss to go on top. My work for Beauty Salon ended up as an exploration of the relationship between the feminine and ideas about transformation and mutability. If the cultural media that surrounds you at a young age persuades you to identify with a manipulate-able surface image, how does this affect your developing ideas of selfhood? Living outside of the reassurance of a more masculine notion, that identity is both inevitable and authentic, the feminine gains handicaps and also certain advantages. In an age where the imagined threat of AI makes the old teleportation paradox more relevant than ever, the feminine experience may offer a vital pluralistic approach to how we can view the structure of human identity.

I love the way chipped nails look – they suggest the aftermath of a glamorous occasion, an interesting back-story or an alternative anti-beauty attitude.
Alli Sharma

Q: Apart from those interested in art, who would this exhibition be of interest to?

Anyone with an interest in beauty, makeup and feminist theory. There is also a broader, sociological aspect that could resonate with many visitors.

Q: Is there a book or catalogue to go with the exhibition, and where is it available?

We have made a Beauty Salon zine which includes contributions from each of the exhibiting artists as well as additional content from artist Paul Kindersley and artist/writer Alex Michon. It is available for free from the ARB or it can be viewed online. 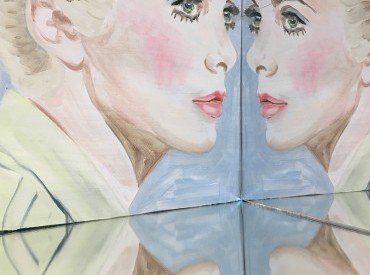