This conference review was originally posted with TORCH Oxford and is reproduced here with kind permission from the author.

There are few conferences which bring together botanists, food historians, anthropologists, art historians, horticulturists, geologists, economic historians, mathematicians, experts in literature (with specialisms ranging from 15th to 21st centuries), modern linguists, tourism and development professionals and plant ecologists. But the 2-day conference organised by Dr Victoria Avery (Keeper of Applied Arts, Fitzwilliam Museum) and Dr Melissa Calaresu (Gonville and Caius; and Faculty of History), funded for the most part by the Centre for Research in the Arts, Social Sciences and Humanities, and held on day 1 in the Sainsbury Laboratory and on day 2 in the Bateman Auditorium at Gonville and Caius in February 2020 did exactly this.

As a Classicist, my connection to the pineapple is perhaps not immediately obvious (Greeks and Romans did not encounter them, as far as we know). My interest in the 'prince of fruits' stemmed from my stay in Honolulu, Hawaii in 2013 – 2014 as a US - UK Fulbright Visiting Professor at the University of Hawaii at Manoa. The legacy of the pineapple industry in Hawaii is visible across Oahu island. My Fulbright project on language education policy was my research priority while I was 'on-island', so I did not, alas, have much time to devote to unearthing the history of the pineapple industry. This conference in Cambridge, I hoped, would fill some gaps for me in helping me to understand the rise, fall and remnants of pineapple production on Oahu.

It did. In spades.

And it began with an olfactory 'Pineapple Spectacular' experience on the lawn outside the Fitzwilliam Museum. Video by Nicki Dawidowski.

During the launch, conference delegates were given pineapple lollipops to taste while a huge pineapple-scented cloud burst from pots assembled at the foot of a giant, golden architectonic pineapple (Bompas and Parr created both the giant pineapple and the pineapple cloud experience). From there, we walked to the Sainsbury Laboratory (an unnatural environment for a Humanities scholar – but the pineapple-shaped fairy lights in the auditorium put me at ease) in the Cambridge University Botanic Garden, the venue for the first day’s papers as outlined on the conference programme.

In Session 1, Historian Professor Rebecca Earle (Warwick) provided a fascinating overview of pineapples across time and space, 'From the Caribs to Carmen Miranda'. She interwove Spanish literature from the 16th century, 18th-century art and popular cultural ethnographies to give an illuminating introduction to the history of the pineapple. This was an excellent way to start the conference.

Dr Peter Crane (Oak Spring Garden Foundation) provided a paper by video. As a world-leading botanist, his paper was informed by research in botanical archives. Peter uncovered writings in Latin (Flora Sinensis) pineapples by Michael Boym (1612 – 1659), a Jesuit missionary from Poland. Boym recorded the flora of China during his travels, including a beautiful image of a pineapple from 1656. He also shared some of the archival records which refer to the descriptions of the flavour of pineapple. My favourite was this, "It tastes as though grapes, apricots, redcurrants, apples and pears had been mixed together all at once in it. Its scent is lovely and strong. When they are cut open, the whole room smells of it."

Dr Melissa Caldwell (University of California at Santa Cruz) gave a historically informed and culturally sensitive paper on 'The Pineapple Between Tropical Imaginaries and American Mythologies'. An anthropologist, Melissa referred to the displacement caused by pineapple plantations in Hawaii, as well as the impact of mass immigration on Hawaii’s native culture and language. I was delighted to hear Melissa mention Professor NoeNoe Silva from the University of Hawaii at Manoa (whom I interviewed during my Fulbright year – it’s a small world). Melissa concluded that the history of the pineapple was both intriguing and troubling. She made connections between the pineapple and 'paradise in decline' in both her native Florida and Hawaii.

Ivan Day, food historian and broadcaster, brought an 18th-century ice-cream mould in the shape of a pineapple which he asked audience members to pass around during his talk, 'As if Rosewater, Wine and Sugar were Mixed Together: The Pineapple in the European Kitchen'. I learned about the engravings on confectioners' and grocers' trade cards and was delighted to see Classical cupids depicted as the messengers of ice-cream from mortals to the gods.

Dr Richard Hawkins from the University of Wolverhampton provided an economic history of the pineapple by focussing on processing and canning from the mid-nineteenth to the 21st centuries. Richard provided a fascinating account of the pineapple 'market' while also addressing contentious issues like the 'welfare capitalism' offered by James D Dole and the impact of scientific agriculture on the Hawaiian natural environment.

Lunch was catered by the Garden Café at the Cambridge University Botanic Garden and was a feast of plant-based deliciousness. And dessert was fresh pineapple, of course. Tours were available around the glasshouse collections and the herbarium with curators. By this point of the conference, I wondered why more conferences aren't interdisciplinary by design? I had enjoyed conversations with a number of interesting people whose research cross-pollinated my own. I learned that food historians develop scratch-and-sniff wallpaper for pop-up museum exhibits. I laughed at the idea of Georgians renting pineapples for a few hours as a symbol of luxury, before handing over to the next party host. I discovered a whole new field: Plant Humanities. Watch this space – I hear a calling.

The afternoon's papers were delightfully visual – more food! Historian Dr Melissa Calaresu (Cambridge) included both pineapples and pomegranates in her paper about representing and eating exotic fruit 1500 – 1800. And Dr Kasia Boddy (Cambridge) showcased the uses of pineapple in contemporary English literature and film. She included references to pineapple rings on toast and cheese and pineapple sticks in a tinfoil hedgehog from Jeanette Winterson's 'Why be happy when you could be normal?' (2011).

This conference provided rich opportunities for diversely situated researchers to share knowledge, skills and experiences. I developed new, mutually beneficial partnerships and left buzzing with ideas for interdisciplinary collaboration. For me, investing a day of my time at this event (slightly beyond the boundaries my academic field) certainly bore fruit.

CRASSH has created a Wakelet summary freely accessible on the CRASSH website here.

You can learn more about Dr Arlene Holmes-Henderson's work and follow her on twitter at @drarlenehh. Enjoy a preview of her one of her recent publications, Forward with Classics: Classical Languages in Schools and Communities, edited by Arlene Holmes-Henderson, Steven Hunt,and Mai Musié, and listen to the Book at Lunchtime panel discussion for this text. 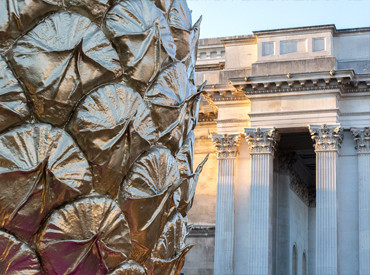 Detail of the pineapple, Fitzwilliam Museum