On Not Forgetting Nadine Gordimer

By the time I found myself sitting at a table next to hers in a Johannesburg café in 2011, too tongue-tied to speak to an author I’d read and loved for fifteen years, Gordimer had lived in or near that city for some eighty-seven years.

When Nadine Gordimer was asked two years ago how she would like to be remembered, her answer was typically unsentimental: ‘Let me be forgotten'. One can never take a writer too seriously when they make such statements, particularly if made in an interview with a major newspaper, but if we take her at her word, it raises the question of what she might have meant. Perhaps she wanted her biography to be forgotten, leaving her works in its stead: ‘The best way to be read,’ she once said, ‘is posthumously.’ Perhaps, rather, she wanted to be forgotten for the right reasons, the inequalities against which she fought throughout her life rendered so improbable as to lapse from relevance. Although I am loathe not to grant her wish, it is too early to do so: her life is still too bound to her works to pass over it in silence, and her writing still resonates in a South Africa devilled by its past.

By the time I found myself sitting at a table next to hers in a Johannesburg café in 2011, too tongue-tied to speak to an author I’d read and loved for fifteen years, Gordimer had lived in or near that city for some eighty-seven years. She was born in 1923 in a small mining town called Springs, not far from iGoli, the ‘place of gold’. This experience was formative – mines and their various attendant exploitations became a recurring trope in her writing. Her first published book was Telling Tales in 1947, a collection of short stories that appeared just one year before apartheid began. She published variously and voluminously throughout the delirium of racism that characterised the National Party’s rule, and she saw out their welcome demise. Her most recent novel, No Time Like the Present, published just two years ago, was the last of some fifteen novels and over two dozen collections of stories published across a lifetime of unwavering artistic and political commitment. She won the Booker Prize in 1974, and the Nobel Prize in Literature in 1991, honours well-deserved, but finally secondary to the novels and stories themselves. While she appreciated the recognition, her response at the time of winning the Nobel was to remind everyone that ‘writing is not a horse race’.

The relationship between writing and politics in Gordimer’s writing is complicated, a mutual shaping of inwardness and the outside world. She remained adamant that she was ‘not by nature a political creature,’ as she told the Paris Review in 1983, and yet her fiction and critical essays read like seismographs of societal change in the country she refused to leave, despite repeated government censorship and harassment. Although she died on 13 July, I think she would have appreciated that the announcement was made the following day, Bastille Day, given her commitment to freedom, equality and brotherhood. It was always the writing that came first, though, and it was through a delicate literary excavation of the society around her that she first came to political consciousness: ‘the “problems” of my country did not set me writing; on the contrary, it was learning to write that sent me falling, falling through the surface of “the South African way of life”.’

Commitment, in Gordimer’s estimation, was not only political, it was also a question of finding a ‘thread of order and logic in the disorder, and the incredible waste and marvellous profligate character of life’. This commitment was to the challenges of literary form as much as to the demands of social reality. In one of her most famous essays, she describes what she considers the writer’s ‘essential gesture’, namely the ‘transformation of experience’ that comes about from ‘the lifting out of a limited category something that reveals its full meaning and significance only when the writer’s imagination has expanded it’. Her books became more experimental from the 1970s onwards (The Conservationist, Burger’s Daughter, July’s People), as she sought new means of distilling South African society into unique literary vessels. There was no compromise for her between content and form, with each novel an effort to divine the currents flowing under the society’s surface, and to let them shape the contours of the work she was creating.

Gordimer’s formal mastery, along with her desire to be forgotten, remind me of her thoughts on the short story. She considered it the best form to depict the texture of life in modernity, in which ‘contact is more like the flash of fireflies, in and out, now here, now there, in darkness. Short-story writers see by the light of the flash; theirs is the art of the only thing one can be sure of—the present moment’. On a different scale, the image of a flash that captures a moment of truth is apt to describe Gordimer’s career. Her life may now have lapsed into darkness, but for ninety years it burned fiercely, illuminating the historical moment through which she lived, and bringing into the light truths that others preferred to keep in darkness. She was unequivocal in her judgements – the idea of a ‘wrong side’ of the colour bar was a nonsense, as that would imply a corresponding ‘right side’, quietism was akin to complicity, and if there was to be victory, it must be for all: ‘without that proviso there is no victory, for anyone’.

The finite scope of a life draws attention to the time-bound structures with which she engaged, namely the lifespan of political ideologies, and the efficacy of the forms of protest that work against them. Although she saw out apartheid’s end, her political instinct remained sharp, and she was as merciless in her criticism of the increasingly corrupt ANC government as she had been of the National Party. As recently as last month she spoke out against Jacob Zuma’s attempts to introduce the ‘Secrecy Bill’, which seeks to limit freedom of speech, and is in some ways more restrictive than much apartheid-era censorship legislation. She expressed her horror at these measures, asserting that ‘the reintroduction of censorship is unthinkable when you think how people suffered to get rid of censorship in all its forms’. Given this development, she was shown to have been prescient in 1991, as South Africa was making tentative steps towards democracy, to cite lines from Polish poet Czesław Miłosz:

What role, I wonder, might authors now play in mounting the kind of critique Gordimer offered? In a country still facing considerable challenges, the relative depoliticisation of its recent literature has been read as a shying away from Gordimer’s ‘essential gesture’. However, as she made clear, after years of ‘choosing every situation and every word for its trajectory against apartheid’, it was time for ‘South African writers […] to open themselves to a new vocabulary of life’. One of the most beautiful tributes that has appeared in the flurry of commentaries over the last few days came from Patrick Flannery, a fine writer and critic in his own right, who tweeted a line from her story ‘Afterlife’: ‘That exquisite pain of loss. You can experience that only if you’ve once had the fulfilment it confirms.’ Having lived as she did, she must have felt the pain of her own losses exquisitely, but this loss is one we must now suffer. Let this suffering serve, though, to confirm to us that both her writing and her lived example made our lives richer and fuller. Hamba kahle, Nadine, go well. 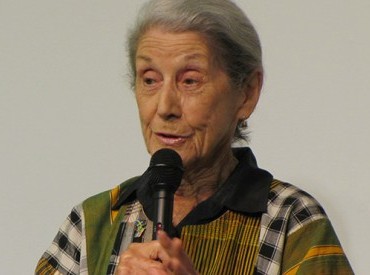