The colour spills through the film creating so many pools of sensation. And as this signals, bruising love and its illusions are really the film’s subject.

In his review of Blue is the Warmest Color, Anthony Lane closes in on the original French title of the film, La Vie d’Adèle – Chapitres 1 et 2, finding it ‘more affecting’ than its English counterpart because ‘it implies that, if life is a novel, there are more chapters in store’. He continues: ‘I hope so, not because I expect a sequel but because the end of the film makes you long for Adèle to be happy, though you fear that such a day may never dawn’. For Sophie Mayer in Sight and Sound, the French title allows the reading that two films have been intertwined, ‘a Bildungsroman about a young working class woman’ and a loose adaptation of Julie Maroh’s graphic novel (Le bleu est une couleur chaude).

Since its first outing at Cannes, and the unprecedented award of the Palme d’or jointly to director Abdellatif Kechiche and the two lead actresses, Adèle Exarchopoulos and Léa Seydoux, La Vie d’Adèle has roused a frenzy of comments. Its most provocative move, doubtless, is its graphic, extended, liquid filming of sex acts between Adèle and her lover, Emma. But beyond the pleasure, disquiet (and laughter) that their love-making has triggered, there has been an incessant hum in the press about the conditions of filming the project, about Kechiche’s treatment of his performers and technicians, about the relation of the film to the original bande dessinée and, in the past few weeks, about the treatment by the press of the film itself, even by French journalists.

If something does stick in the throat about the film, an issue for me is its uncomfortable joining of two different trends in French cinema. The film is throughout a love story, taking as its close subject Adèle’s coming out, her extraordinary passion, and her necessarily painful sentimental education. And so from its start we see her in classes at her lycée reading Marivaux, a Kechiche favourite, and talking about Antigone. (A piece in French cultural magazine, Les Inrockuptibles, argues that the film is really at base all about education.) We see Adèle’s awkwardness with the boy she is dating and her failed move to kiss a girl in the school bathroom. The early sequences of her crush on blue-haired art student Emma play out with careful realism. In an affecting scene, Emma turns up to wait for Adèle at the lycée exit. Up to this moment, Adèle has desired Emma – she appears in her fantasies as she touches herself, Emma’s blue hair falling against her skin – but Emma’s feelings have been unclear. Her presence at the gate, announced by the glimpse of her hair, initiates their love. The film seems all caught up in Adèle’s feelings, her longing for Emma felt through the camerawork. The scene gives a moment of almost unhoped-for reciprocity.

The graphic novel is mostly monochrome, but plays with the colour blue affectively, as blue cuts across the frames, marking out Emma’s appeal. Kechiche’s film borrows this use of colour to figure heightened attention, the staining or filtering of vision through feeling. So the azure, unreal colours of Emma’s hair are picked up in the colours of Adèle’s sheets, the classroom walls, a hydrangea flower, the memorable dress Adèle wears in the final scene, and in the shimmering indigo lights of a night-time projection of Pandora’s Box with Louise Brooks. The colour spills through the film creating so many pools of sensation. And as this signals, bruising love and its illusions are really the film’s subject. It is less delicate in its storytelling, but in its emotional range La Vie d’Adèle comes close to Mia Hansen-Løve’s Un amour de jeunesse (2011), where Camille (Lola Creton), at lycée and then later as a trainee architect, painfully gives herself over twice to a love affair with no possible happy outcome.

Like Creton, Exarchopoulos has an extraordinary ability to give herself over to the part she is playing. Part of the disturbance of La Vie d’Adèle comes from her availability. If Adèle is too involved, unbounded, for Emma to go on loving her, Exarchopoulos herself gives a performance where her skin and her flesh seem utterly impressionable and responsive, open and unguarded. So we see her nose run, we see her blush, we see her come, and seemingly endlessly we see her eat. In all this Adèle is avid, unthinking, involved and in her very bodily eagerness oddly vulnerable. The self-exposure Exarchopoulos achieves is startling, but for me the alignment of this fearless acting with the kamikaze love of the character becomes uncomfortable to view. In a critical piece in The New York Times, Manohla Dargis complains about how frequently the film gazes at Adèle from behind, showing her buttocks in jeans, showing them bare, and from various angles in bed with Emma. For Dargis, Kechiche is ‘roving’ over Adèle’s body and not conveying her subjective experience. I find, by contrast, that the film does make me feel each turn in Adèle’s feelings, and so to see her as well so physically exposed is ultimately jarring. (In some ways the film recalls the bodily frankness of Lena Dunham’s recent TV series Girls (2012), but misses the ironic reflection that comes in Dunham’s directing.)

La Vie d’Adèle is an explicit film. Not more so, certainly, than some other contemporary French films. But here comes my point about two different trends in French cinema. In its so-called ‘new extremism’, contemporary French cinema, through the work of Patrice Chéreau, Claire Denis, Sébastien Lifshitz and others, has been unremittingly innovative in its filming of sex acts, opening up questions about cinema as sensuous and about the haptic, about choreography and live performance, and about the pursuit in cinema of pictorial traditions of the nude and of anatomical drawing. The modes used have been formally experimental, far from the social realism and character-led vision of La Vie d’Adèle. Yet Kechiche’s film seems, also, avidly to seek the artistic and ethical openness of this extreme trend in auteur works, disregarding how jarring this will be in a lycée drama with a very young actress. And in this vein it seeks boldly to explore surfaces and orifices of the female body, to hold forth on the female orgasm and to reveal (some fantasy of) what women do in bed. This last issue is dealt with frame by frame with realism and tenderness in Maroh’s novel (as it is in graphic form elsewhere by Alison Bechdel or in film by Chantal Akerman). In an interview with Exarchopoulos in Cahiers du cinéma, she reveals that more of Maroh’s scenes were shot, including the heart-stopping seduction scene, but they didn’t make it into the final cut. The film as it is has a love-making sequence that is extended, passionate, compulsive, athletic, urgent, yet oddly unsatisfying. In the eight or so minutes of screen time, it isn’t clear whether we view one sex session or a compilation of scenes from different moments. This doesn’t really matter in itself, of course, but does indicate something of the way the film has stepped into a different mode here, changing tack.

For a film that has a reputation for being extended (more than three hours) and explicit, La vie d’Adèle also leaves a lot out. If we miss months of the unfolding of the relationship between Adèle and Emma, we also surely miss much in their sex life. In the extended sex sequence there is no full frontal nudity and the only actual genital shot in the film comes in a scene where Adèle poses naked for Emma to draw her. If the films of Catherine Breillat, another French extremist, have brought extended reflection on female sexuality through the legacy of Courbet’s L’Origine du monde in the filming of the female body, Kechiche’s film, despite its exposure of Exarchopoulos and its explicitness, fails at some level in its sex scenes to reach a similar adventurousness or intimacy. Not that I would necessarily want the film to go there, but this would be the logical move in its filming of sex. In this sense the approach to extreme cinema is never fully achieved.

As I watch Adèle in her blue dress walk away from a gallery private view in the final scene, I ache for her and, like Lane, I long for her to be happy. I would have liked Kechiche to come closer, with more tenderness, and I would have liked him to imagine other endings, political and personal. But in its realism about a girl in love this is still a blazing, beautiful story. If the film jars in places, shows too much and not enough, it is fearless in its imperfections, like its heroine opening to the world. 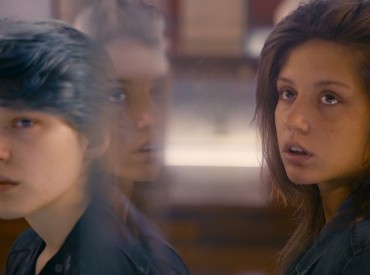