Giving Way offers a powerful defence of civility, the versatile human capacity to deflect aggression into sociability and to exercise power over power itself.

How do you assert a strong and uncompromising case for the value and subtlety of withdrawing and standing aside? This is the kind of conceptual gymnastics that Steven Connor, Director of CRASSH, undertakes in his new book Giving Way: Thoughts on Unappreciated Dispositions. This book follows his The Madness of Knowledge: On Wisdom, Ignorance and Fantasies of Knowing, published earlier in 2019. We asked Steven Connor to tell us more. 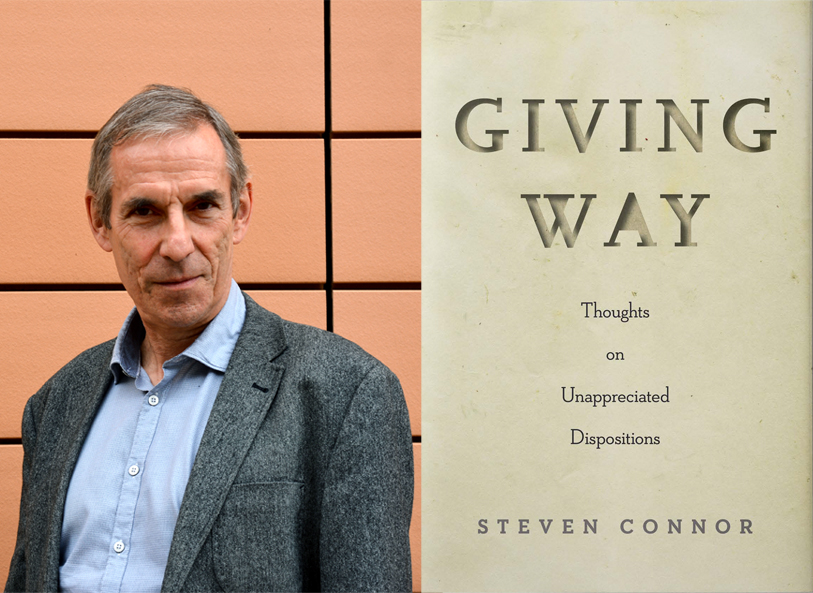 Q. Steve, what is your book Giving Way – Thoughts on Unappreciated Dispositions about?

Giving Way is a book against 'agency'. That is, it aims to diminish and discredit the uninspected prestige accorded, particularly, I am sorry to say, among other left-liberal academics, to the idea of power and the necessity of having it. The book reflects on the deep and intricate knowledge human beings have about giving way, holding back and standing aside, rather than demanding their due, asserting their rights and advancing their interests. There is no one word that encompasses the entire, tumbling, extended family of these delicate behavings, though I think they have enough of a family resemblance to merit the name (my invention, god forgive me) of 'abstitutions'. I was firmly dissuaded by Stanford University Press from actually calling the book Abstitutions, but giving it up for Giving Way gave me no pang, since most of my books have an official and a private title, like the Queen's birthdays (the book that goes about the world under the name Beyond Words for instance has been known to its begetter since before its begetting as Aristotle's Cough.)

I was not so much drawn to the subject with which Giving Way deals, as startled into it by the realisation that it was not the kind of thing that could currently count with anyone as a subject at all, along with the hope that if I did any kind of job with it, it might be. All the time I was writing it, I thought of Norbert Elias toiling, in Cambridge for a while, I think, over the place of table manners in what he called the ‘civilising process’, even as he was receiving letters from his mother interned in Treblinka where she was eventually murdered. I have a growing suspicion that the most important job for the humanities is not to crack problems but to conceive them, because it is more important for the humanities to be interesting than important. Or if it is not, then we must glumly accept that striving for the latter often stymies the former.

The book aims to break out rather than conclusively brick up the question of how social life is built around actions of civil holding back, so I hope there would be plenty for others to do were they to find anything useful in the concept of abstitution. The book gets going with a chapter about codes of politeness, those acts of verbal modulation, or ‘mannering’, which are different in every culture yet universal in that it is hard to know what kind of culture could possibly do without them. A chapter called ‘Backing Down’ follows this up with an exploration of the corporeal rhetoric of submissive gestures, nodding, bowing, curtseying, kissing, crossing yourself, that kind of thing. Then comes a chapter devoted to the cohesive force of forms of collective abstinence, which tries to show that human communities are often most powerfully bound together through what they refrain from (sex, pork, tattooing, vaccination, etc) rather than what they positively do. Chapters follow on the theatrics of collective apology (I come out against it), the many ways of being a good loser, including the ultimate form of willed withdrawal in the ars moriendi, or stylisation of dying, and the incurable human addiction to caring for things. Along the way, I take note of things like resignation, humility, haircuts, pardons and pet-keeping. The book's argument unfolds on progressively larger scales, moving from intra-human common courtesies, to human-animal relations, to the global civility of human-inhuman ecological awareness.

Q. In your view, wherein lies the book's main contribution to our understanding of (human behaviour/civility/actions/attitudes etc)?

Much of Giving Way builds on an acute observation made by the anthropologist Robin Fox that human beings tend to assume, rather strangely, that only bad things need explaining. So we probe the causes of divorce but not of happy marriages; we puzzle over what causes cancer but not what causes comedy; we dispute the causes of violent crime, but do not think to ask what might cause tolerance or generosity. We tend in fact to think that good things have conditions, rather than causes, which allow them to occur spontaneously, unopposed by bad things. To say you were interested in the causes of mercy or kindness would probably imply that you thought they were the mischievous effects of some kind of ideological trick. I may not often have succeeded in pinning down the root causes of being nice, or accounted for the universal human horror of unstyled existence, but I have tried to show the impressively subtle and powerful work that they do. I draw from Robin Fox as well my assumption that being mannerly depends not just on the tendency of human beings to submit to discipline or repression but on the evolution in us of a positive instinct to inhibition. The capacity to inhibit utterance, for example, would seem to be an indispensable attribute in creatures as simultaneously clamorous and querulous as humans, who nevertheless have to learn to keep mum in collective hunting. Freud assumes (actually he doesn't all the time) that inhibition is a problem, the cause of which needs to be got at. I see the capacity for inhibition as itself a necessary and productive cause of much of what is bearable and even at times beautiful in social life.

Giving Way is not a book about all the things we don't know about the virtues of restraint, refraining and inhibition, but a book about everything we surprisingly don’t let ourselves realise we do know about them. Those who urge us on every side, and they are legion, to release and realise the powers of human self-enlargement are saying, like Ted Hughes’s ‘Hawk Roosting’, ‘We are going to keep things like this’. The understanding that we live in a finite world, which we have never got properly in focus before, means that we must now start learning to inhibit ourselves as uninhibitedly as we have previously sought to fill out the lurid lexicon of the illimitable. I hope there may be some utility in a growing awareness of the active and versatile power of holding back we already possess, a power over our own power that is likely to be the only thing that makes civility or civilization possible for creatures as aggressive and appetitively ambitious as we show no signs of ceasing to be. 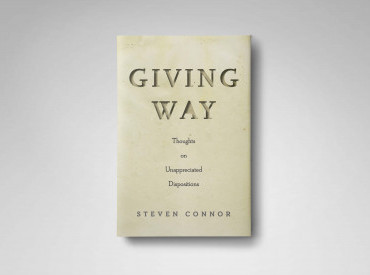