Absurdity has always snaked through the veins of Egypt’s body politic; aspiring satirists rarely have to prod hard at establishment flesh before breaking open a rich seam of riotous farce.

A few months before Egypt’s anti-Mubarak uprising erupted in January 2011, an incompetently-photoshopped image appeared on the front page of state newspaper al-Ahram.

It showed the then-president striding confidently ahead of Barack Obama and other leaders at a regional summit; in reality, Hosni was lagging behind. Naturally, the internet had a field day. The Mubarak photoshop meme quickly flooded all our inboxes; I remember waking up most mornings to the sight of the 82 year old landing on the moon, or outrunning Usain Bolt at the Olympics, or hoisting aloft the World Cup. It felt silly, and exciting, and strangely cathartic. We were only weeks away from parliamentary elections, Mubarak’s last act of grand stagecraft (his ruling NDP party ‘won’ 96% of the first-round vote) before Egypt’s people brought down the curtain, and there was a quiet, dizzy joy to be found in puncturing the regime’s self-important, punctilious rhetoric at a moment when currents of unrest were beginning to swirl so forcefully on the ground.

Absurdity has always snaked through the veins of Egypt’s body politic; aspiring satirists rarely have to prod hard at establishment flesh before breaking open a rich seam of riotous farce. It’s no surprise then that since 2011, as each of the revolution’s epic shudders has shuffled new and largely identikit elite faces into the political foreground, both professional and amateur comedians have moved quickly to skewer them. For many of us these days, regular immersions in the Onion-style parody website el-Koshary Today (sample headline: “Cairo speed bumps on trial for ‘impeding traffic’”) or the illustrations of dissident cartoonist Andeel are the only way to make Egypt-watching bearable. Recently though, even the funny guys have seemed at a loss – and for a simple reason. What is there left to lampoon when official discourse becomes a parody of itself?

So far this year, a fictional puppet used to advertise a mobile-phone network has been questioned on terrorism charges, a farmer has been detained for naming his donkey ‘Sisi’, a decade-old episode of the Simpsons has been cited as proof of a secret plot by the west to engineer the Arab uprisings, and the Egyptian army has announced the invention of a device to both detect and cure HIV, AIDS and Hepatitis C. “I take AIDS from the patient, and feed the patient on AIDS, I give it to him as a kofta skewer to feed on,” explained military general Ibrahim Abdel-Atti back in February. “I conquered AIDS with the blessings of my Lord, glory to him, with a rate of 100 per cent.” When three journalists for Al-Jazeera English were arrested in their hotel room, footage of the incident was leaked to Egyptian television and set to the soundtrack of the Hollywood sci-fi thriller ‘Thor’. In their trial, video of sheep-farming and trotting horses was presented as prosecution evidence.

Wael Eskander, an Egyptian journalist and revolutionary, talks of friends of who were arrested by the security services in the past for allegedly trying to burn down the headquarters of the Muslim Brotherhood, and are now back in detention – for allegedly being members of the Muslim Brotherhood. “Egypt is where logic comes to die,” he says. “The emperor organises the circus, but this time you don’t even need to get off your couch to go and cheer.”

Now the emperor has a new promoter for his circus: Tony Blair, whose admiration for General Sisi is matched only by his passion for lucrative consultancy contracts with some of the region’s most celebrated human rights abusers. It was confirmed this month that Blair would be advising Sisi on economic reform, the former British prime minister adding his name to an ever-growing list of New Labour celebrities (Alastair Campbell, Darren Murphy) who have buddied up with figureheads of the counter-revolution; plans for a Mick Hucknall-accompanied parade in Tahrir Square are surely close to fruition. New Labour, of course, were staunch defenders of Egypt’s ancien régime: Blair described Mubarak as ‘immensely courageous’ and ‘a force for good’, and took family holidays at the president’s Red Sea villa; Peter Mandelson, just days before Mubarak was forced out and with millions of Egyptians still protesting on the streets, wrote a letter to the Financial Times insisting that Hosni’s son Gamal should be saved. We now know that right up to that dictatorship’s final moments, Mandelson was lobbying it for business on behalf of his private strategic advisory firm. New Labour, it must be remembered, came into office with a promise to pursue ‘ethical’ foreign policy. The satirists have their work cut out for them indeed.

Mandelson’s last-gasp defence of Gamal Mubarak was instructive; it was Gamal who worked as one of the main architects of Egypt’s neoliberal makeover in the years leading up to the revolution, and it was Gamal who was cast by sympathetic international elites as the palatable face of tyranny (a word Mandelson chose to put in quotation marks in his letter to the FT). Gamal was someone the west could explicitly get on board with – a reformer and a gradualist who believed he could slowly change the look of Egyptian politics, without changing Egyptian politics very much at all. The brash young clique around Gamal never had much time for the older generals now running the country, and the antipathy went both ways. But these two wings of the ruling caste shared then, as they share now, an indestructible mutual interest: shielding the Egyptian state, and the political and economic model it was built on, from any attempt by outsiders to reconfigure it from below. It was an interest they shared too with the higher echelons of the Muslim Brotherhood, whose leaders fought – brutally, and incompetently – to stop the Egyptian people becoming interlopers in the corridors of power, to contain the revolution’s grassroots energy and keep the state’s fiefdoms intact. It is this shared interest that, whatever their public utterances on the subject, Blair and his colleagues are serving today.

Blair has spoken of a titanic struggle in the Middle East; there is indeed a titanic struggle unfolding, but it’s not the one he sermonises about. Blair, like Sisi, is desperate to present Egypt and its neighbours through a lens that pits autocratic militarism against Islamic fundamentalism – a binary that sets state against state, repressive theocrats against repressive secular strongmen, chaos against order, and encompasses everything except the agency of ordinary people. It’s the binary choice that offers no real choice at all, the one that has long helped to prop up dictatorial elites in the face of revolt, the one that is being in deployed in Egypt at the moment to cram unshackled political imaginations back into their boxes and enable the existing structure of the state see off its biggest existential threat to date.

The real faultline in Egypt right now is not between secularists and Islamists, or between Muslims and Copts, but rather between those seeking to build a different ecosystem of power – one that isn’t based on patriarchal authority at the top and infantilised obedience below – and those who are struggling tooth and nail to preserve as much of the old system as possible whilst superficially appropriating the language of change. That faultline runs through schools, universities, unions, factories, families, football clubs, churches and mosques; it is profound and it is everywhere, and it is the reason why respected Egyptian historian Khaled Fahmy rightly argues that this ‘unprecedented’ revolution has only just begun. Egypt has experienced many events over the centuries that have been classed as revolutions, but they have generally been launched by one counter-elite looking to overhaul another. This revolution was launched by a people who wanted a different kind of state altogether, and so far it has produced a succession of different counter-elites who have jockeyed to seize control of the castle whilst doing everything they can to defend its teetering walls.

Sisi’s absurdist circus is just one more piece of fortification; in an official universe where everything – from endlessly-looped nationalist ballads to dark warnings of foreign conspiracies – is geared towards silencing all opposition and rebuilding haybat el-dawla, the ‘prestige of state’, where is the farce in interrogating a puppet, or transforming journalism into a crime, or deciding to turn upwards of 20,000 people into political prisoners? They are all tiles on the mosaic, an offering of both crisis and solution, showing people the dangers they have unleashed by dreaming and the security they could regain by returning to the state’s fold like errant children who belatedly realise the error of their ways. Egypt may be where logic comes to die, but from the perspective of its elites – and the elite foreign operators now shilling for their cause – it makes perfect sense after all.

Unfortunately for them, the ascension of each new post-Mubarak leader has begun with a period of relative quiet, only for the ‘passive’ circus audience to decide they don’t want to be such a passive audience after all as both the structural contradictions of the status quo and the government’s unwillingness to genuinely respond to revolutionary demands become increasingly apparent. Blair and his friends had better enjoy all the perks of the show whilst they still can; Egypt has changed, and its new ringmaster may not be around for long. 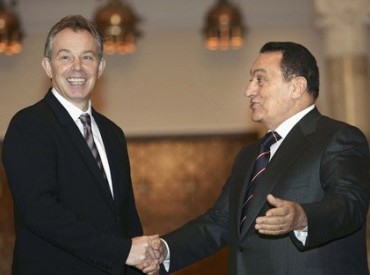