There are no one-size-fits-all definitions that are useful for everyone – historians cannot study the sixteenth century and the 1960s in the same way – and so practitioners apply the analytical concepts in different, and sometimes contradictory, ways. Yet, the scholarly conversation has not broken down.

This blog post outlines some of the ideas presented in different chapters of this volume. This post was originally published on the gloknos blog, and is re-posted here with their permission.

Johan Östling visited Cambridge in May 2019 to deliver a lecture titled Circulating Public Knowledge: Towards a New History of the Postwar Humanities – you can listen to the talk here or in our media gallery.

1. Developing the History of Knowledge

The history of knowledge endeavour has attracted growing interest, especially among early career researchers. Over the last five years, it has brought together a growing number of scholars with highly diverse research interests. Early modern theological tracts; crop failures in the eighteenth century; the promotion of racial knowledge by the UNESCO; the internal workings of Wikipedia: whatever the field of study, the history of knowledge has something to offer. Simone Lässig’s proposition that knowledge can be regarded as a ‘phenomenon that touches on almost every sphere of human life’ and therefore can be ‘used as a lens’ in a wide array of historical scholarship would seem to hold true.[1] Without shifting focus, scholars have been able to draw on and add to ongoing discussions in the history of knowledge.

Moreover, the history of knowledge endeavour has succeeded in bridging the chronological divides between scholars. Scholarly discussions about interdisciplinary and integrative approaches do not typically focus on epochal divides, yet, in practice, chronological boundaries are often just as divisive, if not more so, than thematic, theoretical, geographic, and subdisciplinary boundaries. Hence, we want to stress the fruitfulness of a deliberately interchronological approach.

Historians of knowledge have been reluctant to impose programmatic definitions of key concepts such as ‘knowledge’, ‘circulation’, and ‘society’. This is, we maintain, a direct consequence of the fields’ integrative and interchronological character. There are no one-size-fits-all definitions that are useful for everyone—historians cannot study the sixteenth century and the 1960s in the same way—and so practitioners apply the analytical concepts in different, and sometimes contradictory, ways. Yet, the scholarly conversation has not broken down. On the contrary, productive disagreements have become a distinguishing feature of the history of knowledge. As Maria Simonsen and Laura Skouvig have argued, rather than try to define knowledge, there is a need for a pragmatic conceptualisation. It behoves researchers to sharpen their arguments, be precise, and remain alert to their own particular standpoint and its confines.[2]

The core questions cannot be given definite answers—none of a transhistorical character, at any rate—yet they are undoubtedly productive, as they help us explore the many roles that various forms of knowledge have had in past societies. The research group at Lund seeks to enable and foster this larger scholarly conversation. This integrative capacity is demonstrably one of the greatest merits of the field. However, the generative capacity of the history of knowledge is also under development.

Crucial to this emerging quality is a programmatically broad research agenda, with strong roots in social, political, and cultural history. While the discussions in Lund are certainly inspired by recent developments in neighbouring fields, the majority of scholars involved are trained as general historians. Hence, we would argue that it is vital that the history of knowledge strives to invigorate the discipline of history, and build upon its disciplinary tradition. To this end, the volume Forms of Knowledge is a conscious effort to demonstrate that the history of knowledge is concerned with many different forms of knowledge, and that it seeks to strengthen our understanding of historical societies and larger processes.

[1] Simone Lässig, ‘The History of Knowledge and the Expansion of the Historical Research Agenda’, Bulletin of the German Historical Institute 59 (2016): 44.

2. The Raw and the Cooked

One way of illuminating differences and resemblances is concrete analytical examples. My own research is informed by information history and theoretical insights from the field of rhetorical genre theory. From this perspective, information is formed by communicative actions. Using an example from the police archives in a Danish context I wish to investigate how a perceived need of information defined a need for certain genres of information such as tables, ledgers, reports, verdicts etc. and how information about deviances and criminal behaviour was formed, shaped, communicated and circulated. But police work is also about certain forms of knowledge – most prominently ‘suspicions’ and how they are either verified or debunked and what the consequences for the accused were. Information history and history of knowledge provide opportunities for asking new questions to past events and thus information history and the history of knowledge should take inspiration from each other. However, they also address different research areas with different questions.

3. Phronesis as Therapy and Cure

In this essay, I explore the concept of knowledge in early Swedish psychotherapy. When it comes to describing mental illness and its treatment there has never been much consensus, but the early twentieth century was particularly marked by heated debates and conflicting views, as very different ways of conceptualising mental illness evolved at the same time. I examine how leading psychotherapists defined their method in opposition to other forms of treatment. What kind of knowledge was considered relevant in the clinical encounter, in order to successfully treat a patient? How was this knowledge different from other forms of knowledge? And, crucially, how was knowledge to be defined in the first place?

I am inspired by the hermeneutics of medical encounters developed by the philosophers Hans-Georg Gadamer and Fredrik Svenaeus. Thus, I regard the clinical encounter as much more than just a doctor treating a patient—it is a relationship between two individuals with their own personal beliefs and experiences. In order to get a genuine dialogue going, so making a successful treatment possible, the practitioner needs certain skills that are not just applied scientific or theoretical knowledge. Rather, scientific knowledge is always applied in the dialogical meeting. Practical knowledge is a key concept. It closely corresponds to Aristotelian phronesis, which can be described as practical wisdom gained through long experience of practical matters in life. Focusing on early psychotherapy, my aim is to see how the role of the practitioner can be interpreted from a hermeneutical perspective, and in what way it relates to the concepts of practical knowledge and phronesis.

By the early twentieth century, psychiatry had been established both as an academic subject and as a clinical profession in the asylums. It was, however, a rather new and shaky enterprise. Psychiatrists struggled to prove themselves as scientists and to achieve the same status as other physicians. One way of doing this was to promote a forceful biological model when it came to the origins of mental illness. At the same time, another approach to mental illness was gaining ground. Rooted in hypnotic treatment, early psychotherapy now saw the light of day. In Sweden, the famous physician and hypnotist Otto Wetterstrand gained an international reputation as a healer of all sorts of ailments in the 1880s and 1890s. One of his pupils was Poul Bjerre, who became the most industrious promoter of psychotherapeutic treatment in the early twentieth century. Other psychologically oriented physicians also endorsed a treatment based on suggestion, hypnotic sleep, and a close and intimate relationship between patient and practitioner.

There was a heated discussion among physicians as to the value and effectiveness of psychiatry and psychotherapy. At the core of the conflict lay the concept of knowledge itself. In my essay, I approach early Swedish psychotherapy from three different viewpoints: the relationship between theory and practice; the concept of practical knowledge; and the limits of knowledge.

The contribution introduces the concept confessional knowledge to capture knowledge production, circulation and practices within the specific variants of Christianity that occurred in the confessionally divided Europe, after the Reformation. In the later sixteenth century, three major confessions crystallised: the Roman Catholic, the Lutheran, and the Reformed, each of them maintaining an absolute claim of truth.

The concept of confessional knowledge can contribute to the history of knowledge, as it holds the promise that the history of knowledge can be more than a mere expansion of the history of science. Adding confessional knowledge would sharpen our understanding of the role of knowledge in the pre-modern world, as the example of early modern Lutheranism shows. Agents, institutions, documents, practices and lived experiences were involved in the process in which certain forms of knowing came to be regarded as knowledge within Lutheranism. A prominent example are the professors of theology at the Lutheran territorial universities, who took on the role of chief interpreters of scripture as well as correctors, advisers, and educators. But the confessional knowledge was far from merely theoretical, rather it permeated society, politics, and everyday life. Systematic knowledge developed into a lived practice. In preaching and catechisms, Lutheran dogmatics became social norms and an integral part of people’s lifeworlds that characterised the practices of marriage, household, and princely power.

On the other side, history of knowledge can provide new perspectives on early modern confessions, beyond the concept of confessional culture, which has been criticised to be occupied with models of diffusion and bear an inherent tension between Lutheran unity and Lutheran plurality. It is argued that one possible way of tackling these problems is to draw inspiration from the history of knowledge, a field where analyses of movement and changes in knowledge are central, and the starting point is that knowledge is not produced and then communicated, but rather that the relationship between production and communication is circular. If the meaning-creating function is a circular relationship between production and communication, confessional culture cannot be understood as something that arises when that confession, which exists as the written word, operates in a lifeworld; instead, it must be studied as a constantly changing product of the circular production and communication process that was integral to early modern Lutheranism. By studying this process rather than ‘culture’, the history of confessional Europe would be partially freed from the framework of cultural history.

Johan Östling is Associate Professor and Senior Lecturer at the Department of History at Lund University. His research focuses on the History of Knowledge, and more generally includes Modern European Ideas, Culture and Politics.

David Larsson Heidenblad is a Lecturer and Researcher at the Department of History at Lund University.

Anna Nilsson Hammar is a Postdoctoral Fellow at the Department of History at Lund University. 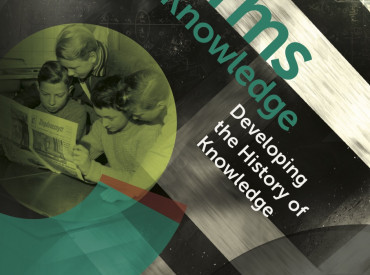