Decolonising the Curriculum in Theory and Practice: Seminar 2

The second event from the “Decolonising the Curriculum” seminar series has made it clear that ‘decolonising the curriculum’ is not a ubiquitous struggle but can hold a plethora of meanings ranging from cultivating understanding amongst students to ‘being toxic’ to universities and turning the establishment upside down. During the second meeting, the focus turned from the UK to perspectives on the decolonisation of education and scholarship in the context of Latin America  – a continent in which decolonising the curriculum means much more than having minority voices and multiple perspectives valued and heard; it involves re-gaining the links to the occupied space both physically and mentally, revitalising ancestral knowledge and ways of living marginalised throughout years of colonial occupation and subsequent domination of the West.

Antonio Sergio Guimares, Simon Bolivar visiting Professor at the Centre of Latin American Studies at the University of Cambridge, began the discussion by introducing us to the work of Guirrermo Ramos, the first Brazilian social theorist that openly identified as black, active in the 1950s. Ramos put forward a critique of what he called consular or colonial sociology, i.e one in which ideas were applied without ‘local colour’ and posed a question, debated till the present, about the possibility of having a uniquely Brazilian sociology. The question evolves around the wider problematic around the universals and particulars of sociological thought. While there is not a straightforward solution to the issue, Ramos emphasised that the universals of sociology depend on its particulars. That the epistemology and ideas used will always depend on the problems in consideration and the kind of questions asked. Antonio Sergio reminded us that at the time of Guirrermo Ramos the questions and problems raised by sociology in Brazil were not Brazilian; modernisation was considered an inevitable process and society was analysed through a Marxist lens of transition from feudal towards a capitalist society. This situation led Ramos to stress the point, relevant as ever, that sociological research must engage with national reality and that foreign ideas should be used albeit not as a primary source of investigation but complementary to a sociology developed from the ‘bottom up’.

Rosaleen Howard, Chair of Hispanic Studies and Director of Centre of Latin American Studies at  Newcastle University, spoke subsequently about the direct efforts to ‘decolonise’ education in the Andes, focusing on the case of Bolivia.  She discussed the intrinsic relationship between language access, discourse and social inclusion and participation taking us on a journey through the transformations that took place within subsequent educational reforms. Following the first introduction of bilingual and intercultural education in 1994, the indigenous could, in the words of an Aymara Education council member, finally ‘have a presence’ rather than just being ‘observers’ in the formation of their own education. While not everything in the garden was rosy with the government gradually distancing itself from the intercultural model and planning new reforms it managed to live on with reformation only taking place after Morales took office. The new educational law most differed most saliently from the previous with the inclusion of ‘intraculturality’ – recuperation, strengthening, and cohesion within cultures – and an open call for a ‘decolonisation’ of education.

Rosaleen underscored the importance of including the call for decolonising education into the official political discourse citing Colombia’s indigenous educator’s Abadio Green’s assertion that if he dared to speak in his country in such ‘big’ terms he would be called a subversive.

One issue, acknowledged by both Rosaleen and the audience, is the difficulty of providing equal consideration for all the 36 groups forming the Bolivian ‘plurination’ with the Chiquitano people (numbering around 180,000) incessantly unrepresented, not to mention the much smaller, mostly Amazonian, cultures or ‘nations’. Can there be decolonisation for all? Who are its explicit beneficiaries, who gets left out and with what consequences? How can decolonisation efforts be made as inclusive as possible?

David Lehman, Professor of Sociology, University of Cambridge and the final from the panelists, spoke about the creation of intercultural universities in Mexico. Such universities, albeit not explicitly ‘indigenous’ were initiated by educators with aims of increasing indigenous participation in higher education both via their curricular content and locations. While ‘decolonisation’, unlike in the case of Bolivia, does not form part of their official discourse it lurks around within the universities’ rhetoric. David described their objectives as removing the autocratic, authoritarian characteristic of higher education and giving the people “their culture back”.  Although most of the teachers do not come from indigenous backgrounds nor speak the indigenous language the application of the ideas of ‘radical’ social theorists such as Leon Vygotsky or Paolo Freire has led the universities to concentrate on “giving people a voice” rather than passively transferring top-down information.

The audience actively contributed to the discussion raising important questions about the legal basis, content of, and the indigenous response to propositions and occurrences of a potentially decolonising character. What does decolonisation really entail in terms of the details of curricular content and process of its implementation? Should the parties involved be held legally accountable for a lack of adherence to reforms? How can indigenous pride be promoted in environments where racism is still very much alive, as well as privileging participation over the potential alluring alternative of ‘assimilation’ in reaction to discrimination. Although there is no straightforward answer to any of these questions, possible  ‘solutions’ emerge from different places. In Bolivia, apart from language instruction, curricular reforms involve the inclusion of indigenous worldviews and visions of history as well as community involvement.  Rosaleen pointed out how in Peru there exist manuals with guidelines towards legal implementation. Moreover, with the law of prior consultation, indigenous communities affected have a say in their formation. Such guidelines can act as a legal reference when reform implementation has unintended consequences and questions of accountability are raised. David suggested that the absence of an explicit discourse of indigeneity in Mexican intercultural universities can make them more ‘attractive’ for students at a structural socio-economic disadvantage, yet without an indigenous self-identification.

Overall, the discussion made it clear that Latin America emerges as a continent in which the hope of intellectual decolonisation is materialising into tangible actions and political objectives are positioning decolonisation not as a chimera, but as a realistic goal. Nevertheless, despite the efforts for a volte-face from Western privilege and colonial discourse there is still a scent of ambiguity around who will benefit from them and the precise direction these efforts will take.

This blogpost was originally published on decolonisingcambridge.org and is reproduced here by kind permission.

Find out more about the Decolonising the Curriculum research group, including forthcoming events, here.

Contributor:
Kasia Buzanska is an MPhil in Latin American Studies at the University of Cambridge and completed her Bachelor’s Degree in Social Anthropology at the London School of Economics. Her primary academic interests revolve around education in the Andes and broader issues in cognitive and linguistic anthropology. 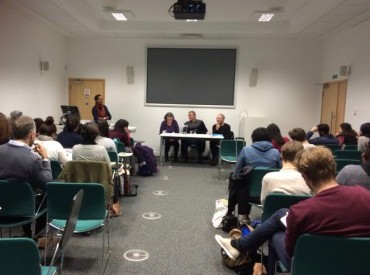