‘Decolonising the curriculum’: A conversation

Can we change the stucture of universities?

Can we change the structure of universities? From the outset it was obvious that this event was not an opportunity to present ‘decolonising the curriculum’ as an easy answer to all the struggles universities face today. Instead it was a chance to interrogate why this idea has come to the fore now in the UK and to ask how ‘decolonizing the curriculum’ can be used to introduce an experience of learning that does not leave students graduating with a shiny photograph of themselves in an antiquated outfit symbolizing ‘qualifications’, a huge debt and a body of knowledge which has reinforced the assumptions, experiences and limitations of past generations of scholarship.

Kehinde Andrews, Associate Professor of Sociology, who runs the UK’s first Black Studies degree at Birmingham City University, opened the discussion with a reminder that it was no coincidence that ‘decolonizing the curriculum’ had become widely discussed in the UK at the very time that fees had been raised to 9000K. Universities are concerned, up to a point, to offer students courses that they want. Modules that build on students’ awareness of societies’ entrenched inequalities attract attention. If someone is going to take on that debt it soothes their conscience to know that they are researching problems that urgently need attention. However, as Kehinde pointed out, the university, as a ‘progressive institution’ is a relatively recent concept, perhaps dating from the 1960s. Historically universities in the UK have been ‘the master’s house’ reproducing inequalities and devising and propagating ideas such as Eugenics. The audience was reminded that it was not simply a case of seeing the university as a racist institution, it has been argued that the university IS racism.

Kehinde conveyed conviction and optimism about how despite these contradictions there is no point in wallowing in apathetic despair about the predominantly white neoliberal university, that has developed out of a troubled legacy of intellectual elitism. Instead we need to use the privileges of the space of the university to have discussions, write books that will be read and crucially, genuinely break down the divides between universities and every one else.

The audience and the other two speakers were then left to juggle with the tensions around how we break down that very divide when much of universities income is drawn from asking young people to borrow large sums of money to buy an identity which sets them apart from everyone else.

Kerem Nisancioglu,  a Lecturer in international relations from SOAS, spoke next about the problems of working in a field such as international relations, which remains relatively silent on the topic of Empire. Kerem observed that using a word like ‘decolonising’ without deconstructing what it means brings pitfalls. Decolonizing the curriculum is in danger of becoming ‘buzz words’ and being co-opted, as diversity has sometimes been, as a means of an institution drawing attention to itself to say ‘How great are we!’

Kerem pointed out that decolonizing anything can be a project of complete chaos and asked how we can find a way to ‘be toxic’ to universities as institutions and yet at the same time rescue the university as a safe space for shared learning. Can we de-colonise our minds and contribute to the construction of new ideas and practices through training and research that is informed by a university community that reflects a genuine widened participation?

Sarah Radcliffe, Professor in Latin American Geography, University of Cambridge, spoke next of the strengths of geography as a discipline which has a long history of introducing the destructive impact of colonialism to students, not just through an understanding of the ‘colonial present’ for example in the Middle East but also in looking at how the domination of the natural world can also be understood as a form of colonialism. She however acknowledged that she was working with a mainly white group of students and staff who both actively enjoy their research and simultaneously become disillusioned about the world in which they were living and working. She also referenced research that reveals how working in unfamiliar underprivileged communities does not often change the mindset of those who go with good intentions. Often the condescension of neo-colonialism lives on through travel.

The audience participation at this gathering grappled with how we find a realistic way to work in universities so that we don’t reinforce the culture of those who can easily afford the costs filling all the places. If in the process of decolonizing the curriculum we become so unwilling to compromise with those in powerful positions in universities, because the nature of their power was built on decisions with which we do not wholly agree, do we then unwittingly put off certain students from even applying?

Those for whom no predicted family inheritance will pay off their debts and who chose to ask difficult questions about society which mean that a career working to help their local community seems a more ethical choice than finance – will they be put off from signing up for degrees at all? The ensuing discussion also touched on how global power networks can ignore local antagonisms; why anti-austerity protesters are so often white; how universities may play a part in exacerbating certain problems around the pay gap for Black students and whether the curriculum needs to be decolonized from primary school onwards to really challenge long held assumptions?

The underlying tension loomed up in conversation, namely that some universities avoid concrete change in their curriculums because they perceive the debates within white scholarship to be the rigorous and established debates. However, students spoke up to acknowledge respect for the appointments that were made where staff had the courage and the experience to tackle those fears about how curriculums evolve across the centuries. We were left with a compelling problem of how we pull the struggles together and recognize that activism plays a part in learning. Kehinde observed that we are working within boundaries in a university and in the long term those boundaries might become untenable, but in the here and now we need to work ‘in, through and against’ the university, all at the same time.

This article was originally published on the Globalisation Education and Social Futures Research Network blog on 20 October 2016.

About the author: Lottie Hoare is a PhD Candidate (AHRC 2013-2016) in the Faculty of Education, University of Cambridge, and Research Assistant for 'Sir Alec Clegg Revisited'.

The Decolonising the Curriculum in Theory and Practice research group is based at and supported by CRASSH, with seminars and events taking place throughout 2016/17. Find out more here. 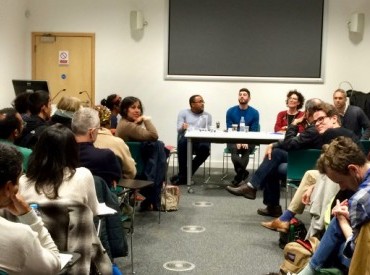