Day 9 (Afternoon I): Religious Diversity and the Secular University

In the context of emerging constitutionalism in the formation of nation-states, there is a profound connection between the early modern concept of toleration and the debate on the presence and visibility of religion in the public square.

From 2 – 13 July 2018, invited senior scholars and select early career scholars are participating in a two-week CRASSH Summer School devoted to some of the most critical issues in the emergence of the modern university and one of the most fraught problems of our historical moment: the related questions of secularism and religious diversity. Scholars will be blogging for the duration of the workshop, so keep an eye on the CRASSH blog for regular updates. In the following post, Pablo Munoz Iturrieta provides a brief overview of Day 9's first afternoon session.

The first session in the afternoon was devoted to discussing the very interesting work in progress by Mariëtta van der Tol, centered on toleration and the constitutional formation of religious freedom in the context of France, Germany, and the Netherlands.

In the context of emerging constitutionalism in the formation of nation-states, there is a profound connection between the early modern concept of toleration and the debate on the presence and visibility of religion in the public square.

Yet, in the constitutional contexts of France, Germany, and the Netherlands, Mariëtta argues that it is not just the idea of the public sphere that varies, but also the levels of constitutional protection of religious freedom with regard to the public space. Given these variations in context, different strategies were developed in order to negotiate relationships between religious diversity and a sense of nationhood. France started operating through a strict principle of laïcité only since 1905. Germany, on its part, preferred to accommodate different religious groups. In the case of the Netherlands, a principle of both accommodation and separation was implemented. Mariëtta presented the example of religious Catholic processions to show how the struggle on the place of religion and religious freedom was mainly centered on the understanding of the public, and to what extent the visibility of religion in the public square should be regulated.

Mariëtta’s insights were very helpful, and it was noted during the discussion how the concept of toleration transformed, how the idea of ecclesiastical toleration developed into governmental toleration into the early modern period, and how the idea of religious freedom as a constitutional right emerged during the debates at the time of the constitutionalisation of these nation-states. In fact, in this new context, religious freedom operates on the principle of freedom, that is, that one is free to profess and practice one’s own religion, in contraposition to toleration, which is a measure of freedom that is granted by the state.

This opened the question of the relationship between religious freedom and normative frameworks, and the role of values in human rights, such as the notion of human dignity. However, there seems to be no absolute religious freedom, and for that reason it has its limitations according to the different declarations on human rights.

We discussed the legal notion of ‘impartiality,’ and ‘neutrality,’ considering that neutrality was a later concept. At the time in which the constitutional formation of religious freedom was taking place, the conversation gravitated around 'impartiality,' as a normative burden rendered ‘neutrality’ unattainable. Yet, Mariëtta argued that, even if there is a normative burden, one has to deal with different positions and interests one is confronted with without leaning to one side or the other. This also led to questions about the notion of equality and new categories of inequality. Mariëtta emphasized that all people are equal before the law, in the sense that their interest are to be protected by the law. The question is how to deal with different interests, especially when it comes to religious issues in the public space. Yet, in early modernity, what one sees is incorporation and segregation. At this time, there was incorporation under certain conditions that were limited and not based on equality. She explained how this later evolved to the current situation where there is equal rights to impartial decisions. In the conversation it was also noted how the notion of equality has taken new dimensions in heterodox societies where the goal is defined in terms of coexistence. The public space is then seen as a visible space of encounter between communities and individuals of different backgrounds, and for that reason impartiality is an extremely important concept in our contemporary world. 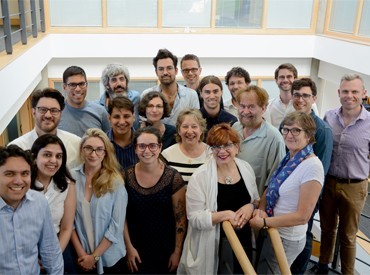