Day 8 (Afternoon I): Religious Diversity and the Secular University

This fateful conversation gave rise to the term 'empty wagon', which has been used ever since to characterize secular existence in Israel.

From 2 – 13 July 2018, invited senior scholars and select early career scholars are participating in a two-week CRASSH Summer School devoted to some of the most critical issues in the emergence of the modern university and one of the most fraught problems of our historical moment: the related questions of secularism and religious diversity. Scholars will be blogging for the duration of the workshop, so keep an eye on the CRASSH blog for regular updates. In the following post, Omer Michaelis provides a brief overview of Day 8's first afternoon session.

During the afternoon session, Jeremy Fogel presented his article 'Loading the Empty Wagon', which addressed the question of values in the Secular University. The question was raised by a presentation of the evocative image of the two wagons, which was put forward by Avraham Yeshaya Karelitz (the Chazon Ish). When asked by Israel’s first prime minister, David Ben Gurion, how secular and religious Jews could live together in the newly established Jewish state, responded the Chazon Ish with a Rabbinic saying: when a camel carrying a load on a narrow mountainous path encounters one empty of carriage the latter must give way. The implication of this reference is that religious Jews carry the goods of their ancestral heritage while secular Jews do not carry such loads. In times of confrontation, therefore, the secular sector should yield. This fateful conversation gave rise to the term 'empty wagon', which has been used ever since to characterize secular existence in Israel. But what is the empty wagon exactly empty of? This question led to a discussion of the nature of the religious critique of the secular university, as well as to the role of values in secular institutes.
Through a reading of Moses Mendelssohn’s magnum opus Jerusalem (1783), Fogel has argued that universities indeed face the problem of a lack of moral vision and pedagogical horizons and claimed that universities could seek to fill the void by encouraging its students toward ‘universal moral goals’. These goals, led by a commitment to abet suffering and to protect earthly life, can be sought in both enlightenment philosophy and traditional religious sources, in order to provide higher education with values that are common to both religious and secular outlooks.
During the session we have discussed two versions of the emergence of the idea of the value-neutrality of science: first, the 17th century Baconian search for useful knowledge that allowed a new and stronger tie between theory and practice that cause an isolating of moral knowledge from natural philosophy; and second, the introduction of the mechanical conception of the universe, in which the idea of a benevolent, human-oriented cosmos was replaced with a ‘disenchanted’ view of nature. Must science be value-neutral, and how much is this idea even relevant to the Humanities? Can the idea of value-neutral science be reconciled with social responsibility, or should it be abandoned altogether? Are some values essential not only for human flourishing, but also for the thriving of science? These are a few of the questions that were evoked during the session, and that continued to resonate in the following days. 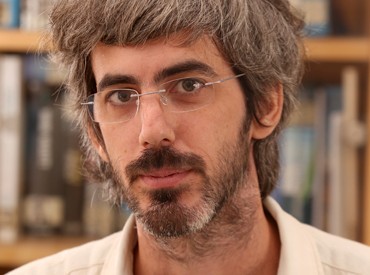 Omer Michaelis, Postdoctoral Fellow at the Max-Planck-Institut für Wissenschaftsgeschichte and a Polonsky Fellow at the Oxford Centre for Hebrew and Jewish Studies