The Hungarian missionaries first came to China at the invitation of the French Jesuits.

From 3 – 14 July 2017, as part of the CCKF-CHCI Summer Institute China in a Global World War Two, invited guest speakers and select early career scholars are combining the discussion of formal academic papers with the close reading of texts in Chinese history and literature. Scholars will be blogging for the duration of the Institute, so keep an eye out for the latest entries on the CRASSH blog. In the following post, Shuang Wen gives a summary of the papers presented in the afternoon of Day 8 of the Institute.

In the afternoon of July 12th, the summer institute on China in Global WWII discussed two papers.

Peter Vamos from the Hungarian Academy of Sciences presented on the topic of 'Catholic Missionaries in Wartime China.' Focusing on the Daming Mission of the Hungarian Jesuits in Hebei, Vamos traced the origins of their endeavors in China, activities in WWII, and the postwar development. The Hungarian missionaries first came to China at the invitation of the French Jesuits. As the French mission grew bigger over time, to solve the problem of staff shortage, they invited Jesuits from Hungary, Austria, and California. During WWII, as Hungary became part of the Axis world, Hungarian missionaries in China chose to cooperate with Japan. As a result, their missionary efforts were, relatively speaking, undisturbed. Through the example of Gyorgy Litvanyi (1901-1983), Vamos showed that the Hungarian wartime missionary activities took on different forms. Litvanyi provided food and shelter, directed the local choir, taught physics, and at times even acted as a dentist. Litvanyi was also the mediator between the Japanese authorities and the missionaries. After the war, Lidoni had to flee from China because he was considered as a collaborator by the CCP. He settled in Japan and taught at the Sophia University for the rest of his life. Vamos presented precious images to illustrate the wartime stories. After the presentation, the workshop participants suggested possible directions for future research, such as the interactions between the communities in Daming (both ordinary people and local elites) with the Hungarian missionaries, by tapping into the Chinese language sources such as Difang wenshi ziliao.

From north to northeast China, Shuang Wen from the National University of Singapore shifted the locale of the discussion to Manchuria, especially Dalian and Yingkou, and explored its global connections with the Mediterranean theatre of war, such as the Suez Canal zone. Wen chooses to focus on Yingkou and Dalian because they were the linchpin points in the global transportation networks for wartime supply, linking overland railways with port cities and the maritime shipping lane. In the pre-circulated paper, Wen discussed the importance of the soybean as wartime supply for military and civilian purposes, its trade between Japan and Britain via the proxies of Manchukuo and Egypt, and how consequently Egypt adopted the soybean cultivation. To supplement her pre-circulated paper, Wen presented at the Summer Institute on the entwined networks that enabled the transportation of soybeans from Manchukuo to Britain via Egypt. These networks include, at the imperial level, the Anglo-Japanese tacit collaboration up until 1939, even after the outbreak of war of resistance in China; at the company level, the competition and cooperation between the Japanese and British conglomerates such as Mitsubishi and N.Y.K. and Butterfield and Swire; and at the individual level, the multilingual representatives of these companies’ offices in Manchuria and Egypt. After the presentation, the participants offered thoughtful comments and suggestions for further investigation, such as looking in more details into the soybean transportation in 1940 and 1941 when the power balance of the war was uncertain and unpredictable. 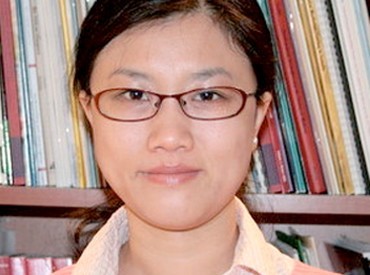 Shuang Wen, Research Fellow at the National University of Singapore