Day 6: China in a Global WWII

They explained the larger challenges of telling complex, nuanced stories, all while we listening to the whine and drone of the Spitfires taking off, landing, and buzzing the Duxford runway.

From 3 – 14 July 2017, as part of the CCKF-CHCI Summer Institute China in a Global World War Two, invited guest speakers and select early career scholars are combining the discussion of formal academic papers with the close reading of texts in Chinese history and literature. Scholars will be blogging for the duration of the Institute, so keep an eye out for the latest entries on the CRASSH blog. In the following post, Judd C. Kinzley from the University of Wisconsin-Madison describes Day 6 of the Institute.

On Day 6 (10 July 2017) the group spent the day at the Imperial War Museum at Duxford, just outside of Cambridge. Duxford Airfield was constructed in 1918, but its history as an operating Royal Air Force base extends back to the 1920s. The field rose to prominence in the Second World War when RAF fighters flew in the Battle of Britain, and later in 1943, when it served as the home of the United States Airforce’s 5th Air Defense Wing (later the 66th Fighter Wing). The US fighters in assigned to the base served primarily as escorts for the B-17 and B-24 bombers dropping their payloads over continental Europe throughout the war. Duxford continued as an operating air base until 1961 and after a long period of disuse (during which it was, among other things, used as the setting for the film the Battle of Britain), the field became an outstation of the Imperial War Museum in 1976.

We were met in the morning at Duxford by collection managers John Delaney, Carl Warner, and Lucy May Maxwell who gave us a briefing in the old briefing room. In this room, where pilots convened before climbing into their planes bound for the continent, Carl, John, and Lucy explained the powerful connection they were trying to create at Duxford between historical spaces, an appreciation for historical narratives, and emotions that are rooted in place. After receiving a wonderful introduction to the collection and the layout of the museum, which is spread across multiple hangers, viewing halls, and includes a working runway, they gave us a personal tour of their American Air Museum. Dedicated in 1997, the hall is striking, dominated as it is by various period aircraft, including a B-52 that greets visitors as they walk in the door. John, Carl and Lucy, introduced us to the collection, pointing in particular to the personal stories and personal effects they use to highlight the larger historical narratives and themes they emphasize across the vast collection.

After a brief lunch, we reconvened outside, where John, Carl, and Lucy discussed the ways in which they segment and categorize visitors to try and appeal as widely across the population as they can. They explained the larger challenges of telling complex, nuanced stories, all while we listening to the whine and drone of the Spitfires taking off, landing, and buzzing the Duxford runway. The rest of the afternoon was spent exploring the rest of the vast collection, including their small but interesting collection of materials on the Burma campaign concentrated in the Land Warfare Hall. 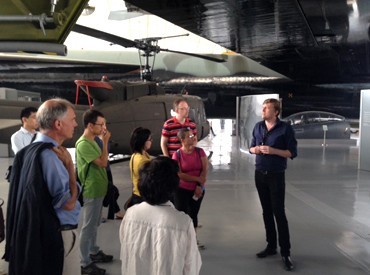 The Imperial War Museum at Duxford