By reading the American missionaries’ triumphalist accounts of their agenda and work against the grain, Hanisek seeks to explain and to recover the ways in which the missions instigated a field of human encounter between the Iranian and American people.

From 2 – 13 July 2018, invited senior scholars and select early career scholars are participating in a two-week CRASSH Summer School devoted to some of the most critical issues in the emergence of the modern university and one of the most fraught problems of our historical moment: the related questions of secularism and religious diversity. Scholars will be blogging for the duration of the workshop, so keep an eye on the CRASSH blog for regular updates. In the following post, David Moshfegh provides a brief overview of Day 4's second afternoon session.

Joel Hanisek’s introductory essay to his forthcoming dissertation on the trajectory of US Missions in Iran extends the recent wave of scholarship on Western missionary activity in the European imperial era to provide a new, innovative prospect for understanding not only the origins and development of American missions in Qajar Iran but also the potential promise of this experience, when properly historicized, for a more human, peaceful future in Iranian-American and international relations. By reading the American missionaries’ triumphalist accounts of their agenda and work against the grain, Hanisek seeks to explain and to recover the ways in which the missions instigated a field of human encounter between the Iranian and American people: suffused by hopes of religious, cultural and social transformation, these ‘human relations’ between Iranians and Americans preceded formal diplomatic and power dynamics between Persia (and eventually Iran) and the United States.  But, recovery of the human and hopeful element of this missionary experience that would potentially move us beyond the mere logic of power relations between states, Hanisek argues, can only proceed by analyzing all the ways the trajectory of the U.S. missions in Iran were made by possible by, conditioned and exacerbated power imbalances that amounted to elision of humanity and human difference.

Accordingly, as the American Board of Commissioners for Foreign Missions (ABCFM) established a missionary foothold in Urmia in 1830’s Qajar Iran, the human experience and encounter they embarked on was founded on and tended to reinforce debilitating polarizations between us versus them, Christians versus Muslims and the developed versus the underdeveloped. First, the very triumphalist ambition of the ABCFM to ‘evangelize the world’ in one generation testifies to the heady, self-serving origin narratives that drove the imagination, calculations and behavior of the American missionaries in Iran. The Congregationalist ABCFM’s missionary focus on the Assyrian (or Nestorian) Christian community in Iran, envisioned the latter as the ‘first Christians’ or even as a lost tribe of Israel: it thus presumed to move from a supposedly realized Biblical landscape in the United States to the original Biblical landscape of the Middle-East in order to fulfill and complete the story of salvation. This presumption not only elided the millennia long history of Christian development in the Iranian context by glossing it simply in terms of degeneration from and return to an authentic origin. It ignored the complex reality of European missionary activity in Iran as well, which had a precedent in Jesuit activity in 17thcentury Safavid Iran and came in 1830’s Qajar Iran itself to be flanked by Swiss, German, British competitors. Second, the American missionary elision of Assyrian Christian difference may have been the least of the inhumanities it inaugurated. Namely, the outwardly limited focus of the ABCFM on the Assyrians testifies to the bitter polemics that European and American missionary activity led to vis-à-vis the Shi’i ulama in nineteenth century Qajar Persia. In this context, not only did American missionaries ridiculously dream of displacing all Christianities, in fact all humanity, with their own version; their dreams served to solidify further a polarized difference between a supposedly Christian U.S. and a Shi’i Iran that denied the religio-cultural complexity of both societies. Such polarization proved to undermine the long-term ‘Iranian’ legitimacy of the very religious minority the missions sought to serve, by helping the Shi’i ulama to claim to represent Iran in religio-national terms in a trajectory leading to the Islamic Republic, spelled out at least in part against the Assyrian, Armenian, Jewish, Zoroastrian and Sunni Muslim minorities in the country. Third, the very opportunity of the ABCFM, as in the case of many other European missionaries, to gain entry in to Qajar Iran, testifies to the power and developmental imbalances that the Qajar state sought to calibrate by allowing for such activity. The Qajars mustered only a very weak state, highly dependent for its legitimacy on the Shi’i ulama while working desperately to curb the latter’s power. The Qajars’ weak position in this internal struggle was made even more untenable in the face of the external foreign pressure from Europe and Russia. Caught between such forces, the Qajar green light to American missionary activity was likely an instrument simultaneously, 1) to tap forces allowing for modern development in education and health care, 2) to access further levers of international diplomacy and legitimacy by establishing common fronts with the U.S. and 3) also a bid to create counterweights to the power of the Shi’i ulama.

It is within the context of such elisions, polarizations and imbalances that American missionaries encountered Iranians in Qajar Iran; it is no doubt also because of them that not only the Qajar state but the Assyrians (and at times Muslims themselves) engaged with the missions in order to access modern forms of education and health care. But, Hanisek concludes that such elision of humanity and difference should not prevent us from noting the human exchange and encounter that nonetheless did occur: on the side of the American missionaries, this included not only greater linguistic and cultural competence but also greater knowledge of Shi’i Islam, even if in a polemical context. In the case of the missionary legacy in the Iranian context, it includes the founding of many schools, amongst them ultimately also Alborz College, inaugurated by the Presbyterian successors to the ABCFM: Alborz began granting degrees in 1928 and set the foundations for modern university education in Iran. On the individual human level, this human legacy includes not only the many Americans whose children and lives became entangled with the Iranian trajectory but also those Iranians in mission schools who then moved on to the American landscape. This story of missionary encounter also includes someone like Howard Baskerville, who moved from the American mission to champion the cause of the Iranian Constitutionalists in the 1905 revolution.

In our discussion, we began by noting the extent to which missionaries in the Muslim context generally exaggerated and hyped their accomplishments in order to match their pretended salvific significance in their eschatological expectations. We then focused on the motivations and narratives that drove American missionaries in a place like Qajar Iran: the ideal of ‘disinterested benevolence’, emanating from Jonathan Edwards and Samuel Hopkins in the Second Great Awakening, would morph eventually also into a specifically American ideal of empire. We talked in this regard also of the specific ways in which American missionaries sought literally to reinscribe themselves within the Biblical landscape of the Middle East. From here, we moved on to discuss the implications of the fact that so much of American missionary activity in Iran and beyond was animated within the university and seminary context: Williams, Andover, Mount Holyoke… eventually Lafayette College founded ‘Lafayette in Persia’ in 1873, namely, The American College in Tehran that would become Alborz. From the missionary context, our discussion then shifted to the Qajar legacy in Iran. Above all, we sought to think through the ways in which the missionary experience and encounter might be accessed from Iranian perspectives. Finally, we also evaluated the missionary impact on the lives of the Iranian Christian minority group it sought to transform and on whose behalf it advocated: while modernizing education and health care had the potential to make the Assyrians into a kind of vanguard, in the context of the weak Qajar state, foreign missionization could easily also serve to mark such minorities as ‘outsiders’, further endangering their standing and welfare within Iranian society. Through the course of our discussion, Hanisek made clear that his focus in the project was squarely on the contemporary American context, namely, as a bid to make clear what ‘human relations’ in the international realm would in fact signify. 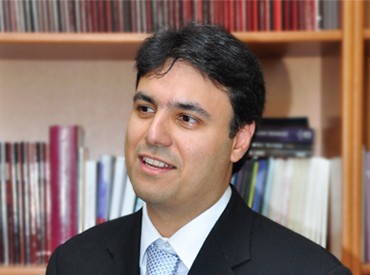 David Moshfegh, Professor of History and Humanities at IE University in Madrid