Chosen Peoples: The Bible, Race and Empire in the Long 19th Century – 5 Questions to the Editors

Chosen Peoples demonstrates how biblical themes, ideas and metaphors shaped racial, national and imperial identities in the long nineteenth century. Even as radical new ideas challenged the historicity of the Bible, biblical notions of lineage, descent and inheritance continued to inform understandings of race, nation and empire. European settler movements portrayed ‘new’ territories across the seas as lands of Canaan. But if many colonised and conquered peoples resisted the imposition of biblical narratives, they also appropriated biblical tropes to their own ends.

Brian, Gareth and Shinjini were all postdoc fellows on The Bible and Antiquity in Nineteenth-Century Culture, an ERC-funded research project based at CRASSH (2012 – 2017).

Currently, Gareth Atkins is Bye-Fellow in History at Queen’s College, Cambridge, Brian H Murray is Senior Lecturer in Nineteenth-Century English Literature at King’s College London and Shinjini Das is Lecturer in Modern Extra-European History at the University of East Anglia. 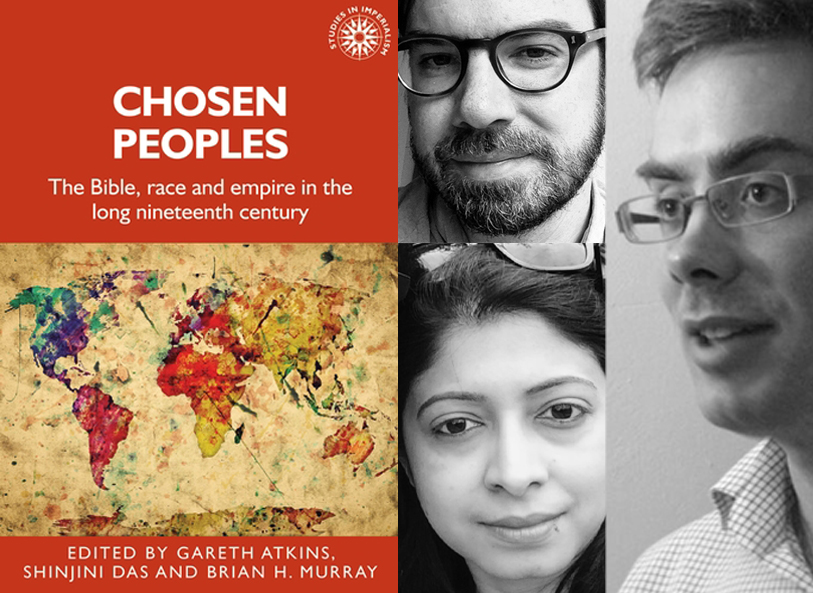 Q. What is your book  Chosen Peoples: The Bible, Race and Empire in the Long Nineteenth Century about?

Chosen Peoples demonstrates how biblical themes, ideas and metaphors shaped narratives of racial, national and imperial identity globally in the long nineteenth century. Even and indeed especially amid spreading secularism, the development of professionalised science and the proclamation of ‘modernity’, biblical notions of lineage, descent and inheritance continued to inform understandings of race, nation and character at every level from the popular to the academic.

While working on the Bible and Antiquity in 19th-Century Culture project at CRASSH, we discovered that we all shared an interest in how the Bible shaped national, imperial and ethnic identities. The conference that we organised around this underlined how European empires and settler colonial movements often saw themselves as ‘chosen peoples’ with a providential mission to spread across the globe and appropriate the lands of indigenous peoples. Yet it also highlighted that the Bible is also full of cautionary tales for would-be imperialists: tales of hubristic emperors who refuse to read the ‘writing on the wall’; legends of once-great kingdoms reduced to ruin and obscurity. In the nineteenth-century, a global European-led missionary project inspired a massive and unprecedented effort to translate and disseminate the Bible among non-European peoples and colonial subjects. Yet, this same process produced vast new communities of Bible readers, many of whom found in the Bible narratives which spoke to their own experiences of displacement, slavery and oppression.

We divide the chapters into two broad categories. Part I, ‘Peoples and Lands’, focuses on the central role of the bible in the formation of national, imperial, regional and ethnic identities. The themes of ‘chosen peoples’ and ‘promised lands’ are so ubiquitous in the period that it’s easy to lose sight of their significance. The essays in this section make ‘biblical identity politics’ visible again with the aim of shedding light on unacknowledged aspects of Atlantic slavery, settler colonialism and maritime imperialism.

Part II, ‘The Bible in Transit and Translation’, concentrates on the movements of the biblical text across languages, oceans, national, religious and ethnic frontiers. European Bible and missionary societies were driven by a universalising impulse: to bring to unvarnished word of God to the ends of the earth. But as the essays in this section demonstrate, the Bible was never immutable. The text itself was transformed by every translation and new community of readers.

Q. In your view, wherein lies the book's main contribution to our understanding of the Bible and Race?

Our book offers the first comprehensive account of how the Bible shaped narratives of racial, national and imperial identity in the long nineteenth century. This is an interdisciplinary collection, with original contributions from emerging and established scholars of ‘race’, empire, science, literature, and religion. Our case studies cover key moments of translation, transition and identity formation in Europe, Africa, America, Asia and Australasia. The book offers a timely contribution to the ongoing debate over the contested legacies of empire, colonialism and the Christian missionary project.

For the last four decades, the historiography of ‘race’ has tended to emphasise the pseudo-scientific discourses and practices that contributed to the invention of race as a category in the nineteenth century. Yet even these new scientific discourses were reliant on an older taxonomy drawn from the Bible (e.g. nineteenth-century ‘race scientists’ used terms like ‘Semitic’ and ‘Hamitic’, referring to the sons of Noah repopulating Earth after the Flood). If you’ve accepted the narrative of the nineteenth century as a period of progressive secularisation – in which enlightened science eventually wins out against dogmatic religion – you might be surprised to learn how much authority scientific thinkers invested in the Bible as a historical record of migration, conquest and dispersal of peoples.

Likewise, the Bible was undoubtedly deployed as a weapon of ‘cultural imperialism’, but Biblical themes and stories also frequently provided a language through which to contest racism, slavery and colonial rule. For these reasons, we wanted to assemble a range of case studies to demonstrate that the centrality of the Bible to the construction and deconstruction of ethnic, national and imperial identities in the Nineteenth Century.
John Coffey’s essay on the 1823 Demerara Slave Rebellion (in modern Guyana) vividly evokes how politically threatening the Bible could be to colonial authorities and slave owners, who rightly feared the potential of certain Bible verses to encourage and inspire rebellion.

Chosen Peoples: The Bible, Race and Empire in the Long Nineteenth Century about? was published by Manchester University Press in February 2020.

Find out more about Research Networks at CRASSH. 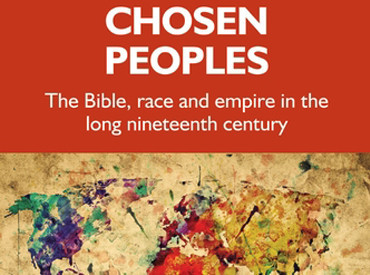