Can Reason Make Room for Religion in Public Life?

For Schleiermacher, the religious and the political realms did not simply compete over the same terrain. Rather, he saw them as distinctive yet constituent parts of the bigger whole of an individual life.

Contemporary Western liberals often assume that theological and political worldviews are competing discourses. Religion, when it enters the political arena, is cast as just another ideology vying for power. But treating the theological and the political as warring forces stops us from looking at the more surprising ways that they interact and inform each other.

Friedrich Schleiermacher was a churchman and civil servant in early 19th-century Germany who rejected a neat partition between the spiritual and the political. In his writing and his life, he grappled, not always successfully, with how to reconcile the two. But in doing so, he offers up some worthwhile lessons about how reason and feeling can coexist in the public sphere, and provides us with a rich picture of what makes life meaningful.

Schleiermacher’s context is key to understanding his thought. He rose to prominence as a man of letters during the upheavals of the Napoleonic Wars, and his interest in the cultural and moral formation (Bildung) of German citizens led him to cultivate a striking array of institutional roles and affiliations. As a scholar, Schleiermacher did field-changing work in theology, ethics and hermeneutics. He had a reputation for being a religious liberal, and early in his career was even accused of pantheism. But he was also a passionate theological educator, dedicated to his ministry in the Reformed Protestant church.

By his late 20s, Schleiermacher was a celebrated member of Berlin’s salon culture. Alongside his friend, Friedrich Schlegel, Schleiermacher became a central voice in what we now call early German Romanticism. This movement arose partly in response to the Enlightenment, and privileged the place of intuition, passion and the transcendence of the human spirit. Yet Schleiermacher also belongs to the Enlightenment project, advocating for the critical power of reason, defending personal liberty, and pushing for institutional reform. In a sense he was also a pioneer of German nationalism, one of a handful of influential thinkers who saw a German nation-state as a potential solution to the problems of the Napoleonic era.

It’s worth mentioning that 19th-century German nationalism was very different to the dark phenomenon it became in the mid-20th century. In no sense was it a mass political movement – it was a minority view, even among the educated elite, and many of those were concerned only with a cultural and social concept of the nation. Even those thinkers that called for a unified German state did so, in part, because they saw the political fragmentation of German lands as an obstacle to resisting the imperialism of Napoleon and to achieving enlightened, liberal government. Schleiermacher was a professor at the University of Halle when Napoleon’s troops invaded and occupied the town in October 1806, and spoke urgently about the need to defend a united Germany. But the source of this unity was rooted in a common German feeling, as well as shared moral and spiritual development, not in any ethnic or cultural essentialism. He also defended the right to free speech, and argued that individual liberty and free participation in civic society should be a central concern of such nation-building.

For Schleiermacher, the religious and the political realms did not simply compete over the same terrain. Rather, he saw them as distinctive yet constituent parts of the bigger whole of an individual life. He was profoundly influenced by Plato in his belief that reason is what orders our desires and instincts – enabling people to govern well, to take their place in a moral and civilised society, and to be properly responsible for their environment.

But religion was still the ‘highest’ and most essential of these two parts, Schleiermacher said in On Religion (1799). Unlike politics, religion is a matter of feeling (Gefühl) and intuition; it doesn’t amount simply to praxis or speculation, but is instead the ‘sensibility and taste for the Infinite’. It was a ‘universal’ aspect of being human, something for which we have the capacity, according to our very nature.

This vision of religion as the ‘highest’ part of humanity was a new iteration of a very ancient idea: the notion that politics alone cannot bring about human flourishing, and that political categories can’t completely capture or describe the full extent of a person. Politics isn’t cancelled out or overthrown by ‘religion’. Instead, for Schleiermacher, the business of governing well is a means to a higher purpose.

While he saw rationality as affording dignity and freedom to human beings, Schleiermacher the Romantic also stressed how people are bound to the world in other, less predictable ways. We are creatures among other creatures, mere tiny parts of nature’s great organism. All of our thoughts, he argued, are conditioned by our circumstances: the language we speak, where we’re from, the community roles we have. Born into surroundings that existed before us and will outlast us, it was clear to Schleiermacher that existence, reality and truth are not created by human beings themselves. Our existence is instead given to us, he maintained, from a transcendent, eternal and infinite source.

According to Schleiermacher, then, to be religious is to recognise that human beings are not the ultimate authors of their own existence, and that they are not the arbiters or producers of value in what they see around them. Meaning is not grounded in human reason. It was in this light that Schleiermacher understood piety as an abiding ‘feeling’ that accompanies all human thinking, imagining, dwelling and doing. Piety for him meant coming to terms with the precarious and miraculous nature of our experience, being conscious of ourselves as creatures who are ‘absolutely dependent’.

But just as politics has its limits, so too does religion. It can’t displace or do the work of politics in our world; the work of the church belongs instead to the domain of the spirit. This is why Schleiermacher didn’t believe in theocracy or religious states. On the contrary, he argued for the separation of church and state, on the grounds that this would promote the success of both. In On Religion, we find Schleiermacher pushing this argument to its limit, when he proposes that religion really belongs to the institution of the family. And vice versa, as part of his national vision, he contended that the education of children in Germany (traditionally falling to the church) should be taken on by the state instead. He also argued that full legal privileges should not be withheld or bestowed for religious reasons, an unusual view at the time.

However, Schleiermacher didn’t always pull off this delicate balancing act between political and religious freedoms. We can see this in his response to the situation of Germany’s Jews. Only a small minority of German states granted Jews official civil and political rights in Schleiermacher’s lifetime, and to his credit he was a vocal critic of this situation. In 1799, as part of a public discussion about legal equality between Christians and Jews in Berlin, he fought against the specific proposal that baptism and conversion to Protestant Christianity should be required for Jews seeking German citizenship and political emancipation. Civil rights were there to establish equality between persons regardless of religion, he said, and to ensure their safety and freedom.

But in reality, Schleiermacher’s understanding of ‘religion’ was distinctively Christian, even though he claimed the concept had universal application. No, legal rights shouldn’t depend on confessional affiliations; but Schleiermacher still contended that a commitment to Jewish ceremonial law and the hope for a messiah were incompatible with a true acknowledgement of Germany as one’s fatherland – and, by extension, a wholehearted participation in German culture. Here Schleiermacher was influenced by the Christian idea that the Kingdom of God can never be fully realised in the temporal world. The upshot was that his attempt to defend the civil liberties of the Jews ended up in a disturbing failure to fully uphold their religious freedoms.

Schleiermacher ultimately fell short in his effort to navigate politics and religion as complementary rather than competing spheres. Nevertheless, his principles provide a valuable source for reflection in our own day. Faced with the question ‘How do we live together?’, Schleiermacher understood that bonds between individuals cannot be truly established or exhaustively described by political power alone.

• This article was originally published at Aeon and has been republished under Creative Commons. 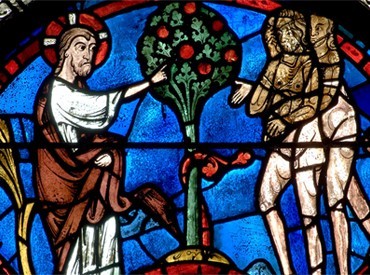 Detail from the Good Samaritan window in Chartres Cathedral.