Call for Papers: After the Soviet Collapse: Transformations in music and culture

Deadline for submissions is 1 October 2016

The conference After the Soviet Collapse: Transformations in the music and culture of the new post-Soviet states and Eastern Europe takes place in Cambridge 12-14 January 2017.

The fifteen national republics of the Soviet Union were originally very disparate in culture but, by the Brezhnev period, they had to a large extent converged on a common Soviet culture. The major structures and precepts of this common culture had also been exported to the countries of Eastern Europe, extending the borders of Soviet cultural space even further. The watershed years of 1989-1991 wrought profound cultural changes, from outright rejection of Soviet practices in one case at least, more modest programmes of adjustment, or in some cases, a continued endorsement of the Soviet cultural legacy.

Focusing on music and the other arts, this conference brings together some of the unique stories of transformation from these vastly different regions, but also to draw out emerging patterns and common trends.

Please send a 300-word abstract and a short CV to mf263 [at] cam.ac.uk. The deadline for submission is 1 October 2016. Applicants will be notified by October 15.

Limited travel bursaries will be available to select participants. 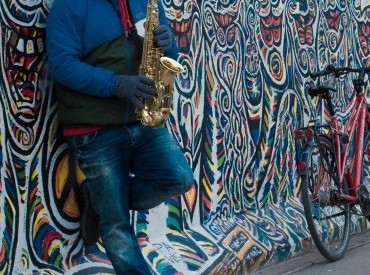 Busker at the Berlin Wall