The current Government believes that university education is to be understood and evaluated by means of a crass instrumental equation: how much does it cost to provide the teaching and what are the resultant salaries after graduating?

So how did it come to this? Why was I strolling down King’s Parade boisterously whistling a peskily catchy tune that had just been sung by fourteen, wellie-wearing, tap-dancing frogs?

The simple answer is the Cambridge Greek play, which staged Prometheus Bound and The Frogs at the Arts Theatre in October to sell-out audiences. The Frogs was “a riotous triumph” according to Rowan Pelling in the Daily Telegraph, and as former editor of the Erotic Review, she should know a good night out when she sees one.  The chorus of frogs who tap-danced, flamencoed, bounced, and flipped acrobatically across the stage, constantly singing that pesky little number, sent everyone, not just me, singing into the street. It was a great evening at the theatre and since the Greek Play has proved a brilliant breeding ground for the best of young acting talent – from James Mason to Tom Hiddlestone – we affected to be only mildly thrilled when eleven theatrical agents and Fiona Shaw, great doyenne of Greek tragedy on the modern stage, slipped into the audience to do some scouting.

But the simple answer won’t ever do in Cambridge. It is still a remarkable and baffling fact that a professional theatre can sell out a run for a play in a language no-one speaks. Of course, history plays a role. The institution of the Cambridge Greek Play started in 1882, when Alma-Tadema and his pals were attracting more than 300,000 Londoners each season to view paintings of classical scenes at the Royal Academy, when Oscar Wilde was encouraging Oxford undergraduates to find out what Greek philosophy really meant, and when Prime Minister Gladstone thought it was his duty to introduce the archaeologist Schliemann on his lecture tour of Britain. The days when Prime Ministers are the warm up-acts for academics are probably past. Alas. The Cambridge Greek play was a novel and breath-taking opportunity for a society obsessed with Hellenism to hear Greek spoken and to view archaeologically accurate costumes. It was a little taste of authenticity, a chance to see embodied the dreams and longings for the lost glories of the classical ideal, as if a Greek frieze came to life and spoke. They had to put on special trains to Cambridge from London to deal with the volume of visitors.

A Greek play has been staged in Cambridge every three years since – but even this long tradition doesn’t explain its current success. Although Vaughan-Williams’ music for Aristophanes’ The Wasps is still a fixture on Radio 3, and although over the years the occasional performance produced moments of flair and brilliance, in reality, as the twentieth century progressed, the play drifted into a rather tedious display of undergraduates in sheets, directed by enthusiasts, playing to a self-conscious audience carrying texts and translations.

Eighteen years ago, it all changed, when the decision was taken to hire a fully professional production team, to introduce surtitles, and to resist any attempts at the pious fantasy of archaeological authenticity. Since then, we have had Electra with video screens, screaming from within an outsized petri dish; a gender-reversed Oedipus in which Jocasta was played by a young black man whose next role was Romeo at the Globe; the chorus of the Agamemnon as extras from Waiting for Godot. And we have built up a huge following of regular theatre-goers, who recognize that this is an event not to be missed.

But there is another reason why I was joyously whistling in the street. The current Government believes that university education is to be understood and evaluated by means of a crass instrumental equation: how much does it cost to provide the teaching and what are the resultant salaries after graduating? The country’s bean-counters demand that everything is measured and evaluated by a cost-benefit analysis. With this play, we saw how twenty-two student actors had given up weeks and weeks of their time to learn an ancient language, to gain new technical, theatrical skills, to rehearse, and finally to perform twice a day for a week. The musicians, too, were unpaid, seriously talented performers, who were enjoying themselves. Academics happily helped with the language-learning. All for a show that after its week in the limelight leaves no more than a fond memory and a tune to whistle.

One reason why Cambridge is a great university is that it understands that creativity, excellence, and inspiration are not nourished by crass instrumentalism, but by trying things that the policy makers would think ridiculous. Who, after all, would think it a good idea to raise £50,000 to hire a professional team to produce a play in ancient Greek in a professional theatre, with student actors? Through performance, we do learn new things about ancient theatre. But the bottom line is that doing a play like this changes the lives of all concerned. And that is a priceless education. 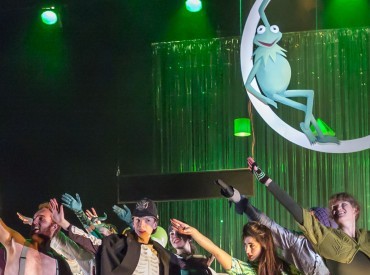 A scene from 'The Frogs', October 2013, copyright Cambridge Arts Theatre